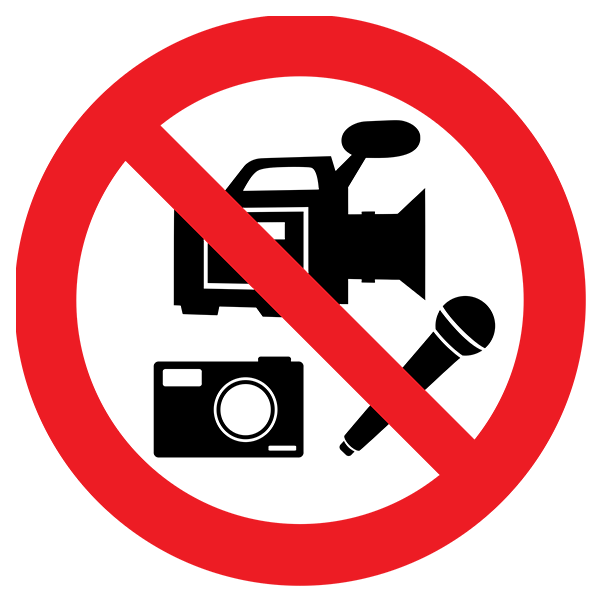 It took an age to make local government more open and accountable – although even now, Boston Borough Council remains one of the kickers and screamers that regards progress as The Work Of The Devil ...

But it is a matter of historical record that anyone now has the right report what goes on in their local council chamber – be they bona fide hacks, citizen journalists, bloggers, or merely individual members of good old Joe Public. More to the point, they can use all modern means available to them – including filming meetings on the mobile phones of tablets

And we’re not kidding about the historic aspect.
This is what the government published as long ago as 6th August 2014.
“In a boost for local democracy and the independent free press, councils in England were brought into the 21st century today after Local Government Secretary, Eric Pickles, signed a Parliamentary order allowing press and public to film and digitally report from all public meetings of local government bodies. This ‘right to report’ updates a law passed by Margaret Thatcher as a backbench MP.
“Following the passage of both primary and secondary legislation, the move opens councils’ digital doors, covering broadcasters, national press, local press, bloggers and hyper-local journalists and the wider public. The new law aims to end active resistance amongst some councils to greater openness. Councils have even called the police to arrest people who tried to report, tweet or film council meetings, or claimed spurious ‘health and safety’ or ‘reputational risks’ to digital reporting.”

It all happened so long ago, that by now, one might think that Worst Street councillors were used to the possibility that their meanderings might be recorded – however much they might prefer to do their job without involving the general riff-raff.
In fact, if they read their own Constitution, which was updated and approved less than a year ago, they will be in no doubt about the rights of the public. 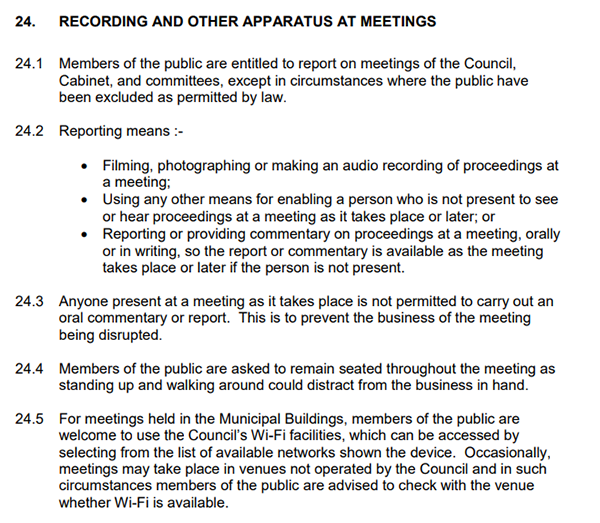 So, despite the unambiguous clarity of this, it came as something of a shock to learn that at last week’s full council meeting one councillor – Boston BiGger  and ‘Skirbeck Independent’ Anne Dorrian (pictured on the right at a previous council meeting) – attempted to overturn this hard-won victory for democracy.

Our local ‘newspapers’ don’t bother to attend council meetings any more – preferring to leave the task to Local Democracy Reporters … journalists funded by the BBC but employed by regional news organisations. But unfortunately, the chap who covers Worst Street was engaged elsewhere that evening.

Nevertheless, the meeting was admirably covered by local political activist Mike Gilbert – a former Tory councillor and creator of the political party A Blue Revolution  – who attends as many meetings as he can as “a community political sketch writer.”
Your can read his report by clicking here ...

His report told us: “Councillor Dorrian asked whether Standing Orders of the council could be suspended to prevent the public from recording the meeting.
“The member of the public, a well-known political activist (and) a critic of the Borough, had his mobile trained on the opposition benches.
“The advice was that it was not illegal for the public to record public meetings and there might be legal implications if the council voted to prevent public recording.
“A process would have to be followed alleging wrongdoing with respect of the individual if such a policy were to be implemented.
“Councillor Jonathan Noble suggested that it was ‘transparency’ to allow filming, to which Councillor Dorrian commented that it felt like harassment and intimidation.
“Councillor Brian Rush said the borough should do the filming as Lincoln did – only to be told Lincoln no longer did.
“There was little concerted support for this proposal to prevent public filming from independent councillors.”

What surprised us more than anything was that after the warning of the legal implications of any ban, that the proposal was actually seconded and put to a vote.

Interestingly, for one who felt harassed and intimidated, the account of the meeting went on to tell us how Ms Dorrian remained unperturbed enough to launch an attack on council leader Paul Skinner  for ignoring a public health issue concerning tooth decay among local children which was not his responsibility, as well as suggesting that as Mr Skinner’s wife and fellow councillor Judith was on a scrutiny committee she would be unable to properly scrutinise the administration and Councillor Mr Skinner as her husband.

Ms Dorrian was also said to have “responded unflatteringly” to a light-hearted remark by the leader during his grilling on public health in which he reportedly said “that the NHS was not run by him, but he was sure he could run the NHS too.”
The precise words are not available – but we are told that they took the form of a suggestion that Councillor Skinner lacked a reading age compatible with such a job.

It struck us as odd that Ms Dorrian should hector Councillor Skinner for his lack of action on something outside his remit, when we can see no reason why she couldn’t have looked into the issue herself – and perhaps then raised it in a way that would secure a response from her fellow councillors … possible via an expression of concern to be lodged with the relevant authority. .

Having suggested that, we note that action does not appear to be a song suit among the Skirbeck Independents.
Their dedicated website makes no end of promises – but has remained stagnant for almost nine months since Ms Dorrian became the last contributor with a “snippet” of what she had done since the 9th May elections which emerged as little more than a slagging off of anyone whose initial weren’t A.D.

We would hope that any future plans to curtail the right of the public to record council meetings if they wish to will fail as they quite rightly should.
But we are worried to hear that the idea seems to have gained some sort of currency with talk of a ‘working group’ to look into the idea further.

No one likes the idea that councillors should feel intimidated; but time has shown that most of them are able to give as good as they get, and if not, then they need to man up.
Sorry, person up.

Minutes of meetings these days are patchy and selective when compared with first-hand accounts by people not associated with Worst Street who attend – and nothing should be done to try to diminish the part that the electors play in their local government ... however much councillors and officers might like the idea.

And we suggest that Mike Gilbert keeps a firm grip on his quill at the next meeting he attends – in case someone tries to make him hand it in for the duration, or worse still, infect it with Pasteurella multocida!