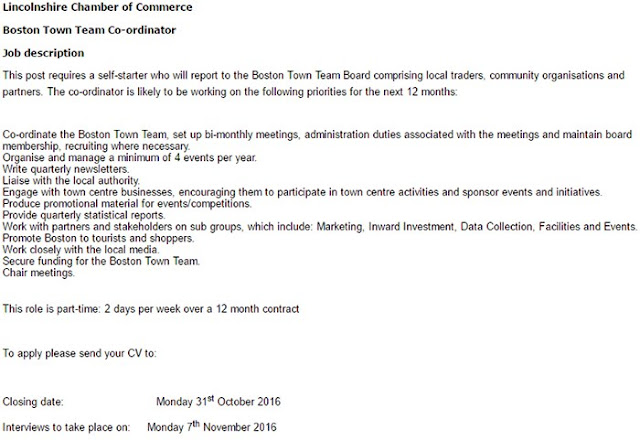 Our blog last Wednesday mentioned the Boston Town Team – which has managed to underperform its predecessor, the pitiful Boston Business “Improvement” District … something we would have considered impossible.

After the blog appeared, we were sent a copy of a job advert pictured above for a new co-ordinator for the team.
The closing date for applications was 31st October followed by interviews just a week later.
Dates as close together as these often appear when an appointment has already been decided, and the procedure is mere formality.
Having said that, if an appointment had been made on 7th November, we would have thought that the news would have been publicised by now.
Given the output demanded of a two-day week, it might also have been the case that no-one bothered to reply.
After all, who in their right mind would think it remotely possible to achieve all the requirements of the job in just two working days?
These include: setting up and chairing bi-monthly meetings, recruiting new board members, organising and managing at least four events a year, writing quarterly newsletters, liaising with Worst Street, encouraging town centre businesses to take part in town centre activities and sponsor events and initiatives, producing promotional material for events/competitions, and securing funding for the Boston Town Team.
We’ve seen adverts like this before  – and the bottom line is that they rely on the post holder working however long it take to meet the targets – and in this case it could be considerably more than just two days.
Perhaps the timing of the vacancy goes some way to explaining why the Town Team appears to have done next to nothing where Boston’s Christmas celebrations are concerned  – and we wonder whether there is a co-ordinator in place or not … and if so who they are and what they are doing.

Our last blog also questioned whether  local businesses would be able or willing to find up to £8,000 every year for the knock-on costs of celebrating Christmas in Boston now that Worst Street has bunged the Town Team £35k for lighting.
A palpable clue came in a comment from former Councillor Carol Taylor who told us that two years ago she and Councillor Paul Gleeson sought sponsorship for the Christmas celebrations.
“A big company kindly agreed to sponsor some of the tree lights for two years,” she told us.
“Another sponsorship came from B&Q who supplied 12 Xmas trees, 12 sets of 100 lights and delivered them to the businesses on Church Street.
"Councillor Stuart Ashton made the wall brackets for them and one of his team and I put the brackets up as well as the trees.
“I paid for the brackets out of my councillor’s allowance.
“The following year only one of the businesses put a tree up – even though they all still have their lights and B&Q would have supplied more trees for with a large discount.
“This street couldn't be bothered and wanted it all done for them.
“Sadly there is a huge disrespect and dislike for Boston Borough Council by Pescod Square businesses and other businesses who will continue to work against the council ... not wanting to work with them for the greater good.
“There are two groups of people who should get off their backsides and work harder though. These are the current elected councillors and the Boston Town team.
"Boston should stop completely blaming the council; it is the businesses as well.” 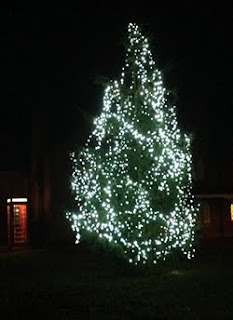 As an interesting sidebar to criticism of Boston’s Christmas tree, take a look at this picture.
This is Heckington’s tree.
This village of just over 3,000 people will celebrate its 150th annual show next year – claimed to be the largest village show in the country ... which regularly draws more than 30,000 visitors.
Boston was once home to the then peripatetic Lincolnshire Show – but when the Lincolnshire Agricultural Society located to a permanent site  in 1959 … near Lincoln ...  never tried to create its own local effort.
Plus ça change, plus c'est la même chose.

Still with things Christmassy – another sign that Boston Borough Council has given up the Ghost of Christmas Past is the absence of a promotional calendar for the town.
Its first effort appeared two years ago – and Boston Eye was among the local organisations to sponsor a page top cover production costs.
As Worst Street was writing the press release, the publication was a major success – and we understand that if certain councillors had paid forall their copies it would have been even more so.
A second calendar appeared last year – although Boston Eye was not invited to contribute … and again helped local charities through its sale.
This year …
Nothing, nada.
The calendar was purportedly a cost neutral production, so its non-appearance this year ought not be due  to economics.
So … it is an oversight, forgetfulness, indifference – something that could form the Worst Street motto.
In fact, in Latin, it sounds even more impressive …. providentes oblivione, neglegentia.

Another item we mentioned last week was the Quadrant application amendment – and the fact that objectors had been given scarcely any time to respond. Not only that, but despite a promise to the contrary, details were not available on the borough website, and the only to view the plans was to travel to the council offices.
Now we learn of another inconvenient little hiccup – inconvenient for the villagers, that is.
Apparently, Wyberton Parish Council did not receive any update or amendment details because they were sent to a previous Clerk who left more than two years ago.
We would have thought that if communications had been sent to the wrong person throughout that time, someone would have noticed, and the mistake corrected – especially with so many borough councillors also “serving” the parish.
So is it a case that for some strange reason this latest change of plan to the Quadrant project was alone in going to the wrong address and causing an unnecessary delay?
Fate forefend.

A straw-grasping entry on the Worst Street website, tells us that: “Boston Borough Council's binmen are among the best-known of the authority's frontline ambassadors …”
We wonder how far down the list our local councillors are ranked …

Perhaps things might improve if they paid more attention to their constituents.
We noted the minutes of a recent planning committee dealing with declaration of interests.
Councillor Stephen Woodliffe  (he who must be fully worshipped) declared having received e-mails about applications, “but it was his practice not to read them and kept (sic) an open mind.”
So how is his thought process shaped when make-your-mind-up-time arrives?
The only way we can find that objections to applications are summarised is in an officer report.
One that we looked at recently included an objection which was quoted thus: “When we constructed our chalet bungalow, we were required to install obscure glazing to avoid overlooking.”
Presumably there is more to this statement – but if there is, it was omitted, and we fail to see how it served any useful purpose … let alone assist councillors in coming to a decision.
Voters regard their councillor as their eyes, ears and voice in local matters – and to ignore them “to keep an open mind” (when the reverse seems to be true) is to do them great disservice.

A new reader e-mailed last week to say:  “After ten years of living in Boston, I recently came across your blog and now look forward to your observations as to the 'workings' of the Boston Borough Council residing in 'Worst Street.’
“My latest observation is the apparent generosity of some incumbent to supply dog owners with 'free’ dog poo bags and to self-congratulate themselves when stocks have to be regularly replenished and the hypocrisy with which we ratepayers are told that it is only fair that green waste bins are paid for by people who use them and not subsidised by people who don't.”
It’s a good point – and one which reminded us that during the 2013 floods, Worst Street went to great lengths to tell us that it did not provide sandbags whilst employing ample stocks to protect its own property.

Whilst we always welcome comments about our blog, a couple from someone calling him/herself “Proud of Boston” will not be appearing. PoB claims not to be a reader – but was “prompted” to take a look by a friend. That’s one we’ve never heard before!
Both comments are lengthy and – doubtless due to the writer’s self-confessed lack of familiarity with Boston Eye – totally fail to appreciate what we are all about.
To publish the comments and then rebut them would be a waste of space and an embarrassment to the sender, so we are not going to bother.
Incidentally, Proud of Boston, “wingers” play in football teams.
We think the word that you were groping for in your harangue was “whingers.”

***
Finally, proof at last that someone in Worst Street reads Boston Eye despite claims to the contrary. 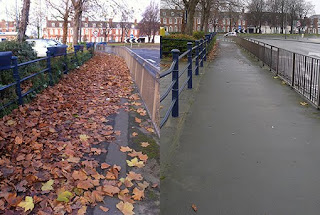 Last Wednesday, our Forgotten Boston feature showed the excessively leafy lane alongside John Adams Way where it runs next to the Cattle Market car park.
Not anymore.
By Friday the path had been cleared – and what a difference our picture shows.
Well done whoever acted so quickly.

You can write to us at boston.eye@googlemail.com  Your e-mails will be treated in confidence and published anonymously if requested.
Our former blog is archived at: http://bostoneyelincolnshire.blogspot.com