A Christmas message from Herbert Ingram
(pictured at the Chistmas Market)

We didn’t burden you with the election results last week …
a)      Because we thought you’d be fed up to the back teeth with the load of old ballots, and
b)      Because the result was a forgone conclusion anyway.

The national result was as expected – and even Matt Warman’s vastly increased majority of 25,632 might have been anticipated given the exit poll prediction.
What was slightly surprising was how badly the rival parties fared – with reports of a recount being needed to determine whether two candidates might forfeit their deposits.

Locally, the by-elections in Kirton & Frampton and Skirbeck saw victory for the Tories as well, and re-cemented by party’s control in Worst Street.
Former cabinet member David Brown – who lost out in May in Wyberton – was streets ahead of his two rivals in Kirton & Frampton, while newcomer Martin Howard won in Skirbeck.
Both were immediately rewarded with cabinet places – Councillor Brown takes over tourism, arts, culture and heritage (he was previously head of rubbish) whilst Councillor Howard is in charge of finance and governance.
It's an interesting and responsibile portfolio for one completely new to local government –  but as a business studies lecturer at Boston College, we're sure that he'll soon get the hang of it.

Despite all their waffle, enthusiasm for independent candidates evaporated – perhaps because neither the ‘true’ independents nor the ‘we are not a group’ Bostonian Independent Group ‘independents’ have been seen to do anything much at all.

And before one of our noisier indies sounds his usual battle cry of “look at our voting record”, the answer is that we can’t because – other than in exceptional circumstances – how councillors vote at meetings is not made public.
Why they can’t just get on with the business of trying to run a decent council instead of all this posing around is simply beyond us.

Still, it could have been worse – a self-styled “Skirbeck Independents” duo has its own website – and if their preferred candidate had won, it wouldn’t have surprised us to have seen them break away from the Bostonian Independents to form a third independent gaggle ... as three is the magic number to go solo and retain one’s committee seats.
That’s unless you’re a Labour councillor when you appear to get special concessions.

Despite all these claims of being non-partisan, the decisions made in BTAC-ky – our town centre ‘parish’ council – shows that so-called independents bend the knee and do whatever the leadership decrees.
This must surely be the case, given that BTAC-ky’s thirteen members number seven ‘independents’ two Labour and only four Tories – despite which they are helping the leadership at every turn to fritter away their local taxpayers’ money on wine, women and song whilst the wards where many of the payees live are neglected, dirty and uncared for.

BTAC-ky’s grovelling even earned special praise from Worst Street ‘leader’ Aaron Spencer, whose webpage fluted: “I’m delighted to see that, following extensive discussion, the Boston Town Area Committee have agreed to fund events within the Borough throughout 2020, including the introduction of additional events.
I’m excited to see the relaunch of the historic and once highly popular Party in the Park, taking over from the hugely successful Music and Beer Festival held earlier this year.”

Councillor Spencer frequently trumpets his “excitement” and “delight” at the “fantastic” goings-on in Boston – but dare we suggest that he ought to keep a closer eye on what his PR manager (yes, really) writes on his behalf.
Whilst we know that in these interesting times, we can identify as whatever we wish – we would have thought that someone of Councillor Spencer’s political longevity might have known how to spell “By-election”.

Unless of course such events can now choose a sexual identity!

A couple of weeks ago, we would have suggested that the two might have ample time to consult over a coffee in the works canteen, as both reported that they were employed at Boston West Leisure –  which was acquired by former councillor Alistair Arundell soon after his resignation from Worst Street.
But Mr Spencer and his mouthpiece now no longer apparently have a shared workplace in common.
Just a short while ago, Councillor Spencer's declaration of pecuniary interests looked like this ... 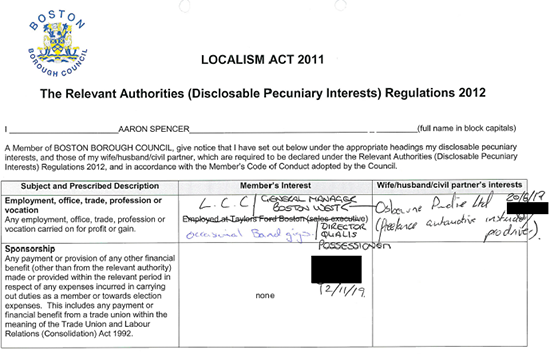 But those were the days –  now, the form has been amended.
Having said that, a caller to Boston West who asked for the name of the man in charge after the amendment appeared that was told to write either to Alistair Arundel or Arron Spencer ... 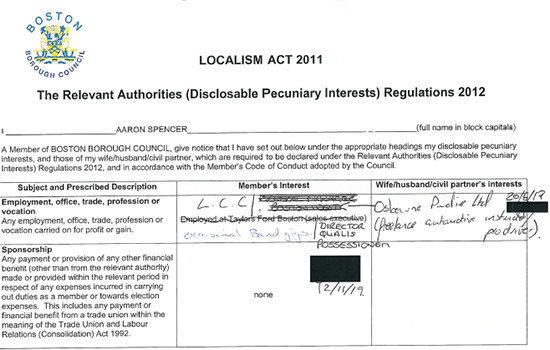 At least the form is apparently up to date.
Councillor Brown's submission appeared to be the one he filled in when previously elected in 2015 –when he declared himself a member of ... UKIP.
It remained online on WorstWeb – the borough's awful website – long enough to excite some wry comment – before being removed by whoever posted it in the first place ... and it may not have been Councillor Brown, or course.
Perhaps it was one of Worst Street's little helpers. If so they need speaking to.

It’s always good to have mates …they never let you down, do they?
And that certainly was the case when Worst Street decided to undergo something called a Corporate Peer Challenge by the Local Government Association.

A team of six senior officers and councillors collectively spent more than 270 hours to determine their findings – the equivalent of one person spending more than seven weeks in Boston.

Whilst we’ll have more on this in a future blog, here were the headlines …

Recognise Worst Street?
No, nor did we.

Whilst some councillors are self important and feel that they are something that little bit special, here’s news of one who appears keen to hide her light under a bushel ...

A planning application to build another property in the grounds of her house was submitted to Boston Borough council way back in July – and at the time, the applicant indicated no affiliation to the council – a question asked in the interests of openness and transparency, at which Worst Street excels.

However, a later form saw all that change …

It’s easily done we suppose, but at least the rules were served eventually – although sadly the application was rejected.

We end on a Christmas note … a pastiche on a well-known carol – penned by Mrs Eye.

Sung to tune of ‘Hark! the Herald Angels Sing’ (with apologies)
Hark! the herald, angels sing,
Boston's got another bin
Come on now, it can't be hard
Squeeze it into your back yard

Jobsworths hoping for a rise
Search your trash with eagle eyes
Folk who do not toe the line
Might soon get a hefty fine
Hark! the herald, angels sing,
Boston’s got another bin.

Jobsworths hoping for a tip
May find they will take a trip
Head first - any bin will do
Merry Christmas to you too
Hark! the herald, angels sing,
Boston’s got another bin.

That’s it from us for this year.
Thanks to the thousands of you who’ve paid us a visit in the last twelve months.
Have a splendid Christmas – and we hope that you will enjoy a happy and prosperous New Year.
We hope to be back sometime in January – unfortunately the NHS beckons once again and so we can’t say exactly when.