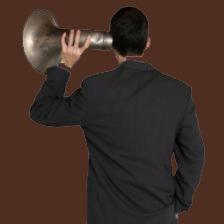 Hearing - but are they really listening?
Yet another “have your say” questionnaire on has appeared on Boston Borough Council’s website.
It asks contributors to rate services as good, average, or poor, and covers just about every council service under the sun, from affordable housing to visitor attractions.
Between the A and V of the list are a number of regularly raised topics – including allotments, parking, street cleanliness and the overall satisfaction with the local area as a place to live.
Ironically, the new questionnaire comes just a couple of months after the appearance on the borough website of an item entitled “You had your say,” which listed issues raised in a previous survey and the council’s comments.
Again, the usual suspects were raised – the Market Place, parking, Central Park, garden waste, public toilets, recycling …. you get the picture.
But in many cases the answers were less than helpful, to say the least.
“Comments” were often simply statements of the status quo, and lacked a human touch.
For instance, a question alleging a lack of community support, advice and information got the response … "Recent changes have been made to update the information available on the internet …” There follows a link to the web page, and then the information that “community information is available each month in the Boston Bulletin. This is mainly available electronically, but there are a few copies available from reception for those without internet access.” Hmmmm.
Or how about: “The Tourist Information Centre is not open for long enough and
regularly enough. More often than not, when I take the trouble to walk all the way down there, it is closed, usually late afternoon. A Tourist Information Centre is badly needed in centre of town, open daily and with local, experienced staff.”
We feel that few people would disagree with those sentiments – but the borough’s “comment” is that “the Tourist Information Centre, situated in the Guildhall, is now open 10-30 am to 3-30pm Wednesday to Saturday. All staff who work at the TIC have extensive local knowledge, experience and training.”
That’s put the questioner in his or her place.
Things like this make us wonder what point there is in asking people for comments if the council brushes them aside so disinterestedly.
On top of all this we have also learned via the borough bulletin … under the headline “You say, we listen – we really do” … that “a year has passed all too quickly since an innovative new group comprised of borough residents and council officers first met.”
Yes, it’s the first anniversary of the Residents’ Sounding Board - set up to try to plug perceived gaps between residents’ expectations and what the council delivers.
Apparently, initial meetings showed that while gaps did exist, both officers of the council and residents were very similar hopes for the borough.
According to the borough, residents’ input has led to action on refuse collection, fly tipping, littering and graffiti.
Problems with cyclists in pedestrian-only areas, speeding, and anti-social behaviour have also been highlighted.
And “Communication by the council has improved.”
Objectives for the future include improvements in Boston’s image and identity; planning to take better account of the town’s heritage; a review of street drinking: reductions in traffic congestion; more enforcement on littering; emphasis on education and integration; and more action to curb anti-social behaviour.
If all of this sounds as if you've heard all this before, then that’s because you have - more than once!
Time and again over the years, we have heard complaints about the quality of key services.
As a result, there’s been a lot of talking the talk – but very little walking the walk.
The time is long overdue for the council seriously to address issues that concern its residents – and not adopting a tokenistic approach that achieves little – if anything.
There’s one piece of good news, though.
For the first time in ages, the latest questionnaire does not devote more space than the subject under discussion to questions about religion, disability, sexuality et al. Perhaps the message that they are intrusive and unnecessary has finally been heard.

You can write to us at boston.eye@googlemail.com   Your e-mails will be treated in confidence and published anonymously if requested.
Our former blog is archived at: http://bostoneyelincolnshire.blogspot.com
Posted by Boston Eye at Monday, December 05, 2011