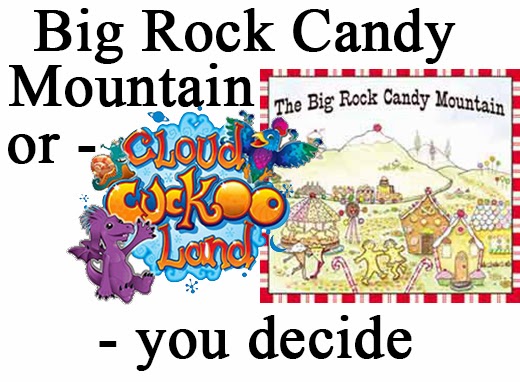 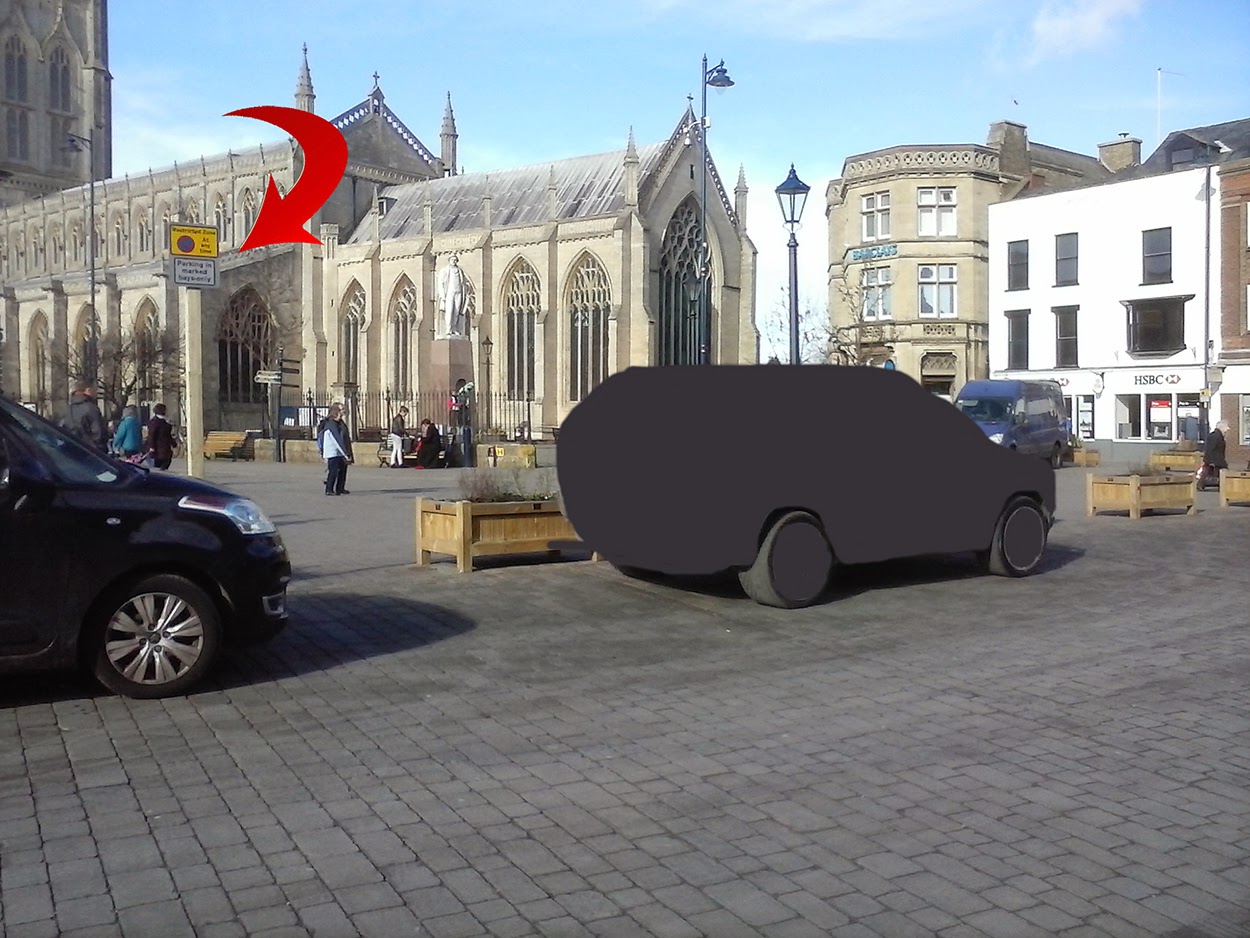 But all thoughts of charity fell by the wayside in the wake of a report that reached us concerning theTale  Of  The Important Councillor’s Car Which Was Parked Against  the Rules.
It seems that not only was the car parked within feet of a sign which clearly warned  “Restricted Zone,  no parking at any time,” but  it also backed up this instruction with another – “parking in marked bays only.”
We are told that the car, which is owned by a senior member of Boston Borough Council, was  not only parked against the rules, but a permit issued to councillors which allows an exception if they are on council business – but only if the councillor concerned is the one who parks the vehicle  –  was on display.
Neither was the case in this event. Our photographer told us: “I saw a woman in the car on a mobile leave  the car to walk into town. I pointed out this abuse of a councillor’s parking permit … This behaviour is totally unacceptable and an abuse of position and very much of the ‘do as we say not as we do scenario’ …”
If this were anywhere else, one might imagine the story to end here.
But this is Boston, where nothing is straightforward – especially if our “esteemed” councillors are involved.
The parking episode was witnessed on a Friday, and two nights later – at 8-30 in the evening, to be precise – the complainant received a knock on the door from two Lincolnshire Police officers.
It seems that instead of being grateful for being spared the potential risk of a parking ticket the councillor concerned had complained that an “ex Tory” was now picking on them!
Apparently, the police had viewed the CCTV footage without finding that any offence had been committed by our complainant but wanted to hear his side of things as they as the are obliged to do  when something is reported.
Isn’t it interesting?
Joe Public reports persistent abuse of parking regulations – and nothing is done.
Joe Public reports a bad break-in, which is written off within days without any effort to find the culprits – and nothing is done.
Joe Public tells a servant working for a senior Boston Borough Councillor about flouting parking regulations – and the full might of the law descends on him unannounced within 48 hours
Colour blind …?
Boston’s effortlessly amusing Daily Bulletin never fails to keep us entertained – but at the same time, occasionally leaves us mystified. Having told us that “purple power rules” it goes on to say that the Rotary Club of Boston St Botolph has sponsored a town centre planter for this year’s Boston in Bloom campaign “and it has been filled with purple crocuses.” 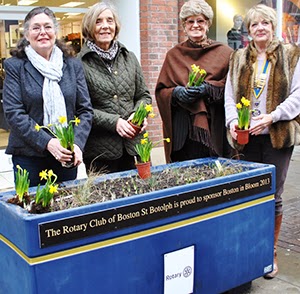 contradictorily the flowers in question would seem to us to be miniature daffs – unless we are colour blind, of course. Interestingly, judging is usually around July, which is a funny time of year to expect to find crocuses in flower – or daffodils for that matter. And although the purple crocus is the symbol for the Rotary End Polio Now Campaign, the colour theme for this year’s Britain in Bloom – of which our efforts form part – is Gold … an entirely appropriate colour to celebrate the event’s 50th anniversary. We hope that the Britain in Bloom judges will remain clear-headed amidst all this colourful chaos. As an aside, we wonder whether our leadership’s economies have included a downsizing of the Boston’s parks. Otherwise why would Councillor Yvonne Gunter, the council’s portfolio holder for parks and open spaces –pictured in the bulletin last week holding one end of a flag for no apparent reason – be in the photograph? Oh. Silly question.
Peter pays Paul …
Last week we mentioned the borough council appeal to raise an unspecified amount to buy for a pair of metal benches to mark the centenary of the beginning of the First World War. Since then, the borough has trumpeted the donation of £100 from The Placecheck group for Main Ridge East. Unless we’ve missed something here, this seems to be a relatively pointless exercise financially.  If memory serves, after an initial grant Placecheck funding comes from Boston Borough Council. So, the council gives a Placecheck group money to improve specific local communities, and the group then hands some of   it back over for the borough’s bottomless memorial bench fund. Does that make any sense to you?
You can write to us at boston.eye@googlemail.com  Your e-mails will be treated in confidence and published anonymously if requested.
Our former blog is archived at: http://bostoneyelincolnshire.blogspot.com
﻿
`