Step by step, Boston Borough Council is closing the door on relations with the taxpayers and retreating still further up its own backside. 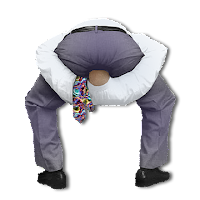 Tonight sees a meeting of the full council – which has been put back to its traditional start time of 6-30pm after a fleeting attempt to reschedule it for 7pm – possibly something to do with the early bedtime requirements of some of the older members.

The minutes for approval are of the meeting on 28th February – even though the annual meeting which saw the appointment of the new mayor, along with some contentious debate, appears to have been overlooked.

As always, there is space on the agenda for questions from both councillors and the voters – although the latter are called ‘members of the public’ as if they are in some way different and lower in status than councillors.

Enter Worst Street’s latest Catch-22.
Questions are usually directed at members of the cabinet – and notably the leader. Even though they have to be submitted a ridiculous time in advance, they never appear on the public agenda and remain secret until the night, which means you have to attend  the meeting if you want to hear them.
But by a piece of administration that eloquently defines the word jobsworth, this occasional opportunity has been nobbled … as the agenda item explains.

Why on earth Councillor Cooper put himself forward in the first place is anyone’s guess – his eleven-day term in office has proved shorter than that of the leaders of some military coups in third world countries.

But the ensuing cack-handed agenda planning gave Worst Street the chance to deny the public the chance to question the new leader.
The reason?
Councillor Cooper’s resignation takes effect today, and the election of a successor does not appear on the agenda  until after the section for member and taxpayer questions.
Ergo: If you want to put a question to the leader, you can’t because there isn’t one at that particular moment in time – as a member of the public who wished to do that was told quite clearly.
Presumably, this also applies to those other members of the public known as councillors who might want to quiz the leader.

Although this is a one-off, it does mean that those wishing to hold the leader to some sort of account will have to wait four-and-a half-months from the 4th May meeting until the next full council meeting on 23rd September to do so.

We believe that this is just what Worst Street wants. As we told you a couple of weeks ago, councillors are accountable in only the vaguest terms, and have no real responsibilities should they not choose to accept any.
Officers are increasingly hiding behind a feedback e-mail address which is being offered to the public as a way to get in touch rather than making a direct approach.
BTAC-ky – now the council’s most important committee in many respects – has reverted to bi-monthly meetings … another move that avoids more frequent accountability.

The Local Government Association ‘improver’ who is coming to Worst Street for a week during September will find the job akin to wading through treacle in order to make any headway.
Perhaps Worst Street is deliberately making things more difficult ahead of that session so that it can appear to offer concessions to modernity and good communications when they are suggested – as common sense says that they must be – merely to resume the status quo.

Most of tonight’s council meeting is the usual rubber-stamping – aside from a couple of motions that express similar sentiments … but different deadlines.
A proposal by Tory Councillor Paul Skinner and seconded by his wife, Judith, urges councillors to commit to make Worst Street’s activities carbon neutral by 2050.
A second motion – proposed by BiGger's Anne Dorrian and seconded by colleague Neill Hastie says the same thing (although rather more long-windedly) but with a date of 2030.

This is apparently deemed so difficult for councillors to take on board that they will be issued with written advice on the procedure for considering two motions on the same subject.

You might expect us to have some adverse comment to make about this – but we don’t.
We heartily support any move to stop the rot that theatens our environment and improve it for future generations.
But we just wish that our councillors would exercise themselves more with the here and now problems besetting Boston and get on with trying to sort them out.

Reader reaction to last week’s Boston Eye report on the brainwave of the new leader (that we don’t have until tonight assuming that he gets elected) were interesting.

One former councillor wrote: “I remember listening to the presentation being made about Merchant's Quay so many years ago.
“Lots of nice drawings, lots of opportunities for Boston Borough Council to invest, but one of the presenters rather destroyed the atmosphere when he said he was in favour because he came from Boston – or words to that effect.
“The apparent need for such a comment made the other ‘pro’ arguments look as if further judgement needed to be exercised.
“Given what happened to the project it would seem I was not alone in my thinking.
“We were, finally, told that Merchant's Quay was not to go ahead because of lack of take up by the necessary end users. (Apparently 70+% such commitment is needed to create scheme viability for developers.)
“If that was so then, is today's retail development/investment climate in Boston any better?”

Even more cynically, another e-mail asked: “Having heard his thinking on the way forward for Boston, would it be a (charity) fundraising idea to run a book on how long the present Boston Borough Council leader will last?”

While Worst Street is unaccountably trying to make the dreadful ‘Wild Bill’ TV programme a selling point to lure visitors to the town, it will still be a long time before we lose another image that we would rather do without.
In a column written around US Independence Day, Daily Mail writer Richard Littlejohn speculated as to how the UK might celebrate the first anniversary of Brexit – or “freedom from foreign rule” as he put it.

Almost inevitably, Boston got a mention. 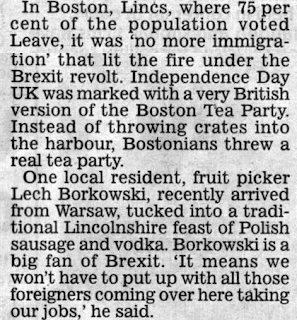 Doubtless there will be the usual chuntering in the civic ranks, but Worst Street is doing nothing to improve Boston’s image and so only has itself to blame.

Mention of Brexit makes us wonder if the coming months may prove worrying for our MP Matt Warman.
According to reports, Boris Johnson muttered something about a snap election during a televised debate with Jeremy Hunt the other night.
It came on the same day that the organisation Electoral Calculus – “a political consultancy specialising in quantitative analysis and modelling for electoral and other market research projects” – predicted victory for the Brexit Party in Boston and Skegness, South Holland and The Deepings, and the Louth and Horncastle seats.

Finally – for someone who hasn’t yet been appointed as Boston Borough Council leader until tonight (assuming this will turn out to be the usual Worst Street rubber stamp) – Councillor Aaron Spencer is certainly talking the talk ... 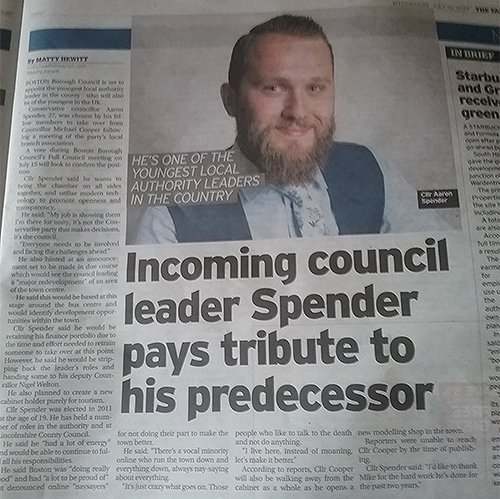 ... So much so that his promises of big and expensive plans for the redevelopment of Boston appear to have prompted our local ‘newspaper’ the Boston off-Target to rechristen him Councillor Spender – not just in the headline but six times elsewhere.
Its’s good that our local hacks are so well-informed, isn’t it?
Our thanks to the reader who sent in the picture.
Incidentally, the interview included a quote which read: “There’s a vocal minority online who run the town down and everything down, always nay-saying about everything.”
If, perchance, Councillor Spencer is referring to Boston Eye, then we suggest he reads the blog a little more closely.
Seldom, if ever, have we run the town down.
What we  have done .... frequently and with justification ... is to criticise senior officers and councillors for their inactivity, lack of imagination, incompetence and in some cases indifference.
If we had a decent council, we wouldn't need a Boston Eye.