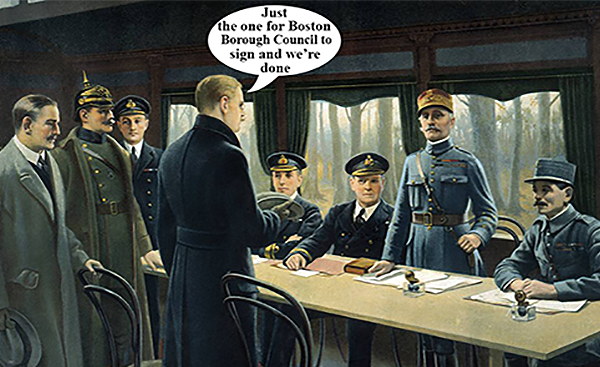 Worst Street is trumpeting the outbreak of peace in the council chamber after donkey’s years of strife, antagonism and hindrance to progress caused by petty bickering and political differences.

Having said that, we somehow see the news as less of a Compiègne Wagon moment – the wagon was the historic train carriage in which the First and Second Armistice were signed in 1918 – but more closely resembling the Weihnachtsfrieden Christmas truce along the Western Front in 1914.

Whilst in the former case it took twenty years before the Germans started another war – the truce saw a cessation of hostilities for just one day before the combatants resumed shooting the living daylights out of one another rather than kicking a football about.

The Damascene conversion of councillors took place a week ago today at the first ‘proper’ full council meeting after which the (eventually) newly-elected leader Aaron Spencer reportedly spoke of his vision for an end to party squabbling and criticism for criticism’s sake, saying that cooperation, transparency and communication would be the way forward.

If this comes about, then Councillor Spencer deserves a medal, and perhaps an invitation to intervene in other great conflicts such as Afghanistan, Syria and Iraq, whilst solving the Mexican drug wars on his day off.
Seriously – whilst we look forward to seeing council harmony happen – we can’t somehow imagine a collection of councillors whose behaviour is normally as mad as a box of frogs billing and cooing as they put aside their differences.
But time will tell.

Afterwards, Boston BiG spokesman Councillor Brian Rush e-mailed to say:
“Both sides of the  Chamber have committed to work together for the sake of the Borough ... and put aside all our concerns, no ifs, no buts ... my understanding is that at last, Boston has a group, of people ... who have vowed to work together with a common ambition, to stand together and make Boston PROUD!

The meeting took one decision in this new and enlightened spirit – the motion which had received two proposals to make Boston carbon neutral by either 2030 or 2050 – and voted to defer matters until after the issue had been discussed by the environment and performance scrutiny committee.
Given the date, it's appropriate to describe the event as one small step for Boston.
But whether it will be the precursor of a giant leap for Bostonkind is another matter entirely.

Almost immediately after the meeting, Councillor Spencer announced his new cabinet – although he had been quoted as saying that he did not propose changing it yet and that it would be a staged process.
He retains control of finance whilst his deputy – Nigel Welton – must be feeling giddy … having in the space of just a few weeks been portfolio holder for the town centre under the old Cooper regime, then portfolio holder for tourism under the newly-elected Cooper regime and now taking over economic development.
His former tourism job will now be done by another newcomer after the May elections – Alistair Arundell – a local landlord and businessman who owns a swathe of properties and a string of hotels.
Fellow newcomer Chelcei [sic] Sharman remains town centre supremo, and others whose roles remain unchanged are one-time UKIPper Yvonne Stevens with the environment portfolio, Councillor Martin Griggs (housing and communities) and Paul Skinner (regulatory services.)

Whether we will see some changes later in the year is moot at this stage.
Given his comments on inclusivity it may well be that Councillor Spencer follows the lead set by North Kesteven District Council – whose leaders have created a “North Kesteven Administration” in which the Conservative group would “no longer exist” and appointed one unaligned councillor and a Lincolnshire Independent to make it more inclusive.
If by any chance Councillor Spencer opts to follow that particular path, we are placing no bets on which non-Tory councillor would expect to be first in the queue to be offered a place.

One thing that we would like to see happen under this new regime would be for members of the public – who are supposedly the raison d'être for the council – to be better informed and involved.
At the moment, they are largely kept in the dark and excluded from information to which they should be entitled – and our new leader should be wary of allowing this practice to continue.

Worst Street’s cabinet of curiosities also met last week – though if you’d blinked, you would have missed it.
During the brief session, one member was heard to register concern about a likely increase in the charges to collect garden waste, but when asked about it afterwards said that nothing had been decided.
Another councillor was more forthcoming – saying that an option to go out to consultation was to increase charges for the service if people wanted it retained or improved and weren’t happy to see service cuts in other areas.

The mention of increasing charges and the fear of doing so was clearly heard by two members of the public who attended the meeting. 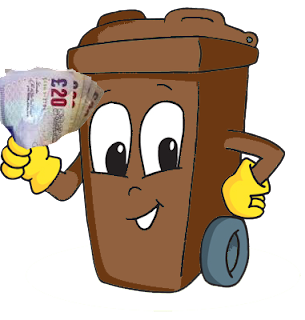 But subsequent online discussions of events fell victim to an impertinent after-hours intervention and lecture by Worst Street’s ‘Communications Manager’ who said: “The meeting today was held to agree to put the proposed £1 million savings required by austerity measures out for public consultation.
“After the meeting agreed this the draft transformation document (that's DRAFT as in nothing yet agreed) was placed on the council website together with the public consultation document so that anyone can register their views with the council.
“No secrecy, no slip of the tongue. It's all there, open and transparent, and the best way to get your opinions known is to comment via this, and not knee-jerk responses to social media soundbites.”

It seems that the new look Worst Street would rather that you didn’t believe the evidence of your own ears, and instead take their word for it.

That aside it is clear that there have been talks of some kind – otherwise the concerns about increasing charges would not have been expressed. Not only that, but another councillor referred to a ‘cock-up’ in cabinet because they were mentioned.

The so-called ‘draft’ merely adds to the confusion.
Whilst ‘nothing has been decided’ – perhaps – the list of possible savings is clearly itemised in terms of amount.
Thus, the 17 areas which have saving or earning suggestions allocated to them specify that – as a for instance – ‘Work for business’ will “utilise capacity of assets by undertaking work for partners and local businesses” and raise £10,000.

Most of the sums are penny ante in terms of Worst Street spending – but eventually add up to the £1 million target in increments sometimes as small as £10,000.
But there are two exceptional amounts on the list.
The smaller of these is a call for a £200,000 reduction in capital spending – which means cutting back on buying, maintaining, or improving fixed assets, such as buildings, vehicles, equipment, or land.
But the larger item – and the biggest on the list, totalling 22% of the total – comes under the headline “policy changes” and concerns “income generation” from a review of environmental operation fees.
To what can the majority of this saving refer, other than charges for taking away our garden waste which constitutes one of the main environmental costs?

Of course, this is just a draft – isn’t it?
But with so much income depending on a hike in environmental charges, it is hard to imagine that it could be much reduced when so many other areas for savings or earnings are that much smaller.

It's worth remembering that when brown bin collections were first introduced, it was with a promise that the service would always be free.
That pledge was broken by the devious ploy of later saying that the service would remain free for the duration of the then administration.
After an election, although the political administration was unchanged, the fact that there had been a vote was deemed to have created a new one ... and thus the means to introduce charges. 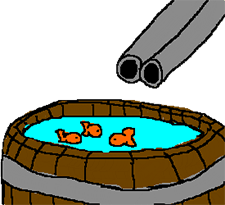 Now – even though the current Worst Street annual report declares the garden waste scheme to be a continuing success –  what looks like a very large price hike is almost inevitable, as there seems nowhere much else to find the money.
There is a technical term for penalising loyal customers in this way.
It is called shooting fish in a barrel.

The main thrust of this so-called ‘consultation’ seems to be to ask participants (four times) what they think about the pros and cons of the council doing what it is doing – rather than proposing specific saving or earning suggestions for people to comment on.

And as we know from many years of such exercises – at the end of the day, after Worst Street asks for our views … it then does just as it intended to do all along.
Can you recall a time when public opinion was acted on?
No, nor can we.