﻿﻿﻿
﻿﻿﻿
Wormgate could go from shambles ... to Shambles
The sad but not unexpected news that two local businesses have had to close after the the Market Place refurbishment slashed their trade by up to £400 a week coincides with complaints from traders in Wormgate that they feel that the “authorities” have abandoned the area.
Whilst the reports in last week’s local “newspapers” are worrying enough, what is even more concerning is the indifferent reaction from those in “authority” to the problems.
In the case of the shop closures, Councillor Derek Richmond, the borough council’s town centre supremo, promises jam tomorrow. He is quoted as saying:” There is no best time for everyone to do such work, but investing in tough times will equip Boston for better times when we come out of the recession. And if we had delayed the start we would have missed out on the vital European funding which has made it possible.”
And there you have the real reason.
The chance to grab some free cash blinded the council to the implications of starting a major project that would have a devastating effect on local shops in the middle of a recession.
The problem with the council’s attitude to a freebie is “if it’s there – grab it.”
Regular readers will recall how the comparatively petty cash grant of £53,000 from the government to improve the look of the town centre by addressing the problem of unsightly empty shops was almost entirely wasted on the useless community hub project – despite better ideas being available.
Afterwards there was much wailing and buck passing, but the reaction was that it was a useful learning curve – and that as the money hadn’t come out of the council’s budget, it didn’t really matter anyway.
If someone, somewhere, had demonstrated some real commonsense, the Market Place scheme would not have been started.
As it is, we have reservations about how it will look once complete, and we are sure that with a little more thought and a little less avarice, a solution could have been found that would have spared businesses the current pain that they are enduring.
One of the traders forced to close is quoted as saying: “I feel if the councils (Boston and Lincolnshire County Council) don’t do something soon, they are going to lose a lot more businesses from the town.”
Who is going to say that they are wrong?
Meanwhile, an Any Questions session for invited businesses in Boston has been organised by Boston Borough Council, and will include representatives from Lincolnshire County Council and the contractors Ringway. It’s being held at the Assembly Rooms on Thursday. Why invited businesses? We suspect that the council is anxious to exclude anyone who might make waves and spoil its talking shop.
To Wormgate now, and complaints of rotting building fronts, a sunken road, pools of water and dirty street lights. One shop owner is reported as saying: “Wormgate is in desperate need of refurbishment. Some businesses are really struggling. I feel like we have been abandoned down here.”
Enter Boston BID manager Niall Armstrong who has “taken a survey” of the area to see what needs doing and “will look to work with the businesses to improve things.”
We would urge Wormgate traders not to hold their breath.
The BID is famously slow to act on everything.
It’s  more than six weeks since it BID spirited Boston’s seven tourist information display cases away to a secret location to be refurbished – and there is still no news of their imminent return.
But that is fast by BID standards - as it is now more than a year since the company decided to blow £17,000 on ten thousand 3D maps of the town - and we still have yet to see them.
It seems to have been conveniently overlooked, but Wormgate has been part of the BID area since its inception almost three years ago – and completely ignored until its desperate business owners have raised their head above the parapet.
Perhaps if the BID’s board members got out a bit more – quite literally – they would be able to see the problems the town faces.
Ironically, given all the waffle spouted about Boston’s resemblance to York, Wormgate is a street that – if sensitively managed - could well compete with that city’s famous Shambles (pictured below left) 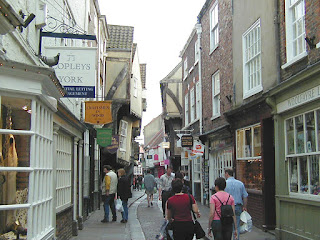 We have also suggested before that at any future Christmas Market could follow a circular route incorporating Wormgate, the area around the Ingram Memorial and the Stump and perhaps even Strait Bargate.
It would add great historic gravitas to the event and make it a true magnet for visitors.

All it takes is a little imagination and a few quid.


You can write to us at boston.eye@googlemail.com   Your e-mails will be treated in confidence and published anonymously if requested.
Posted by Boston Eye at Tuesday, September 13, 2011