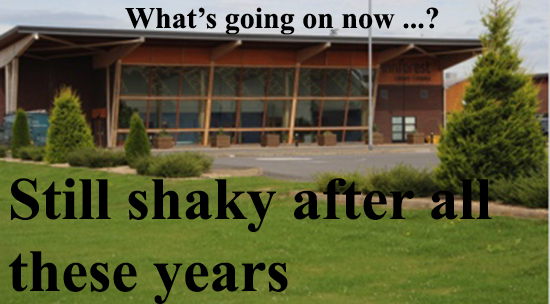 It is becoming more commonplace than co-incidental for “urgent” matters conveniently to arise just in time for a meeting of Boston Borough Council’s Muppet Show – the Cabinet meeting.
Recently, we had the sale of the Assembly Rooms – which not only was deemed so urgent that the Cabinet had to take a decision without consulting the rest of the council –  but also so  important that the democratic use of a “call in” for wider discussion was banned by the “impartial” Mayor, Councillor Colin  Brotherton.
Fortunately, a band of opposition councillors from various groups, who knew the council’s constitution better than the smuggies at the top, drove a coach and horses through that piece of nonsense, and a debate took place – although the outcome remained the same due to the leadership’s stranglehold on its backbench puppets.
Now the subject is one of the most controversial and divisive issues of recent years - the Princess Royal Sports Arena.
Fast forward to last week’s Muppet Show – and the news that “the following item, although not on the agenda, was accepted by the Chairman (Councillor Peter – Fozzie Bear – Bedford)  on  the grounds of urgency.”
Urgent, eh?
It seems to us to be all about leases – which are signed for a fixed term. This means that on the day you sign a lease, you know exactly how long it will be before any changes regarding it become “urgent.”
The Cabinet took the decision “That the Chief Executive be granted authority to seek quotations and employ appropriate lawyers to draw up leases for the continuing operation of the Princess Royal Sports Arena.
Also  “that the current constitution of the Boston Sports Initiative be reviewed in light of the changing requirements of the Charity Commission and the needs of the operator.
You are probably no wiser than the rest of us about much of this – which is why questions need to be asked.
The Princess Royal Sports Arena opened in October 2003.
Since then, it has been a financial millstone around the necks of Boston taxpayers, to the tune of millions of pounds.
But it remains a publicly owned asset – valued on Boston Borough Council’s asset register at more than Eleven Million Pounds.
Core grants – whatever they are – from Boston Borough Council to Boston Sports Initiative in 2011/12 totalled £176,000.
Interestingly – given these dark days of secrecy and lack of transparency within Boston Borough Council – the Chief Executive has confirmed that a full report on the matter will be submitted to the appropriate scrutiny committee before being considered by Cabinet on 7th November.
In March last year Boston Borough Council resolved: “That a formal agreement be entered into in respect of the PRSA based on a two-year reducing subsidy, with budget provision of £176,000 in 2011/12, £88,000 in 2012/13 and a nil subsidy in 2013/14.
The PRSA trustees declared that this created a problem “as the funding level recommended for 2012 onwards was not achievable.”
Meanwhile, the PRSA remains “the home of the Boston Rugby Club” –  which, in a sweetheart deal, was given exclusive catering rights for  all events at the PRSA, and thus an income which might otherwise  have helped  the PRSA keep its head above  the water –   rather than depend on the ratepayers.
Clearly, there is some sort of financial connection between the club, the PRSA, and Boston Borough Council.
Sadly, given its closeness to all of this, Boston Rugby Club is being coy as far as its financial status is concerned. –

Whilst it is hard to say, it seems possible that contributions from Boston Borough Council are somehow keeping the rugby club’s finances healthy – which is surely not the intention.
It’s all too much to fathom – and with a deadline for a call-in set at this coming Friday, October 19th we hope that someone will act to ask for a detailed look at what is going on

You can write to us at boston.eye@googlemail.com Your e-mails will be treated in confidence and published anonymously if requested.