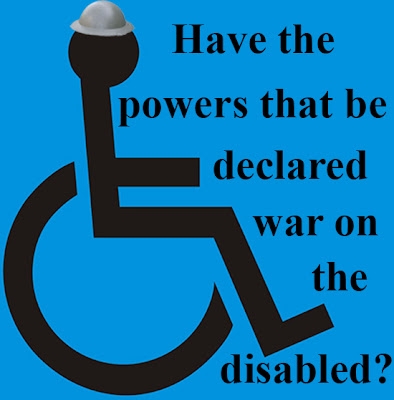 ﻿
It seems that the great and the good never tire of marginalising the disabled in Boston.
Last week saw the start of the rear-guard action to try to get the Market Place into the state that it should have been in the first place – which is to make it a shared space between pedestrians and road users.
Because of their “we know best” attitude, the parties involved in the Market Place refurbishment produced a result which  when completed accurately reflected the fears voiced by  the disabled ahead of the project – and which only now are being acknowledged as genuine worries.
Work to knock the Market Place into better shape began at the start of last week –  with a notice period that gave disability groups barely any time in which to react to the proposed “improvements.”
These involve using planters to screen off certain areas, as well as tinkering with the “tactile” surfaces that give the blind or partially sighted clues to whereabouts they are in an area.
Representatives of various groups have reservations about the proposals, and also feel that more should be done by way of traffic calming.
Yet again, the warning is being sounded that the Market Place is “an accident waiting to happen” – and it is starting to seem that the authorities are indeed prepared to wait and see if one does.
Further plans for Boston include more shared pavements for cyclists and pedestrians – with John Adams Way being one such road.
Admittedly, the footpaths beside the road are fairly generous in most stretches – but proposals such as this ignore one crucial fact.
In Boston, cyclists have always ridden wherever they please – whether or not there are “shared” arrangements.
And when we say “always,” we mean ever since the British engineer, James Starley invented the Penny Farthing in 1871.
Not only do cyclists pedal willy-nilly, they frequently do so at speed, and these days few, if any, cycles are fitted with  a bell to warn people on foot that they are there.
This is bad enough if you are sighted and able-bodied.
But if you are blind or partially sighted, or less than fleet of foot, your chances of being clipped by a passing cycle – and possibly being hurt, or at least badly shocked – are considerable.
Along with a rethink of the Market Place design, there should be a sustained campaign to force cyclists to dismount when they enter areas designated for pedestrian use.
We have lost count of the number of times we have seen riders travelling at speed through Strait Bargate, and other areas where people on foot are not expecting them.
We have also lost count of the number of times our local police representatives have pledged a “crack down” on this illegal activity – but given how often we see the law being broken, we must ask why there have been no prosecutions … unless of course, the promised cracks down have been just a public relations smokescreen?
As if of all this was not bad enough, the disabled now have to contend with yet another obstacle – the al fresco continental-style dining experience ...
There is already one in the Market Place at the Seventh Heaven café - and now we hear that Nero’s in Strait Bargate is contemplating something similar.
That shop already has an ‘A’ board outside which causes problems for disabled pedestrians – and a pavement café facility could sit perilously close to the passing Into Town Buses.
Unless the Market Place and Strait Bargate areas are considered as a whole – and with due regard to the problems faced by all users – then the problems that we are witnessing, and which are now allegedly being rectified, will never be solved.