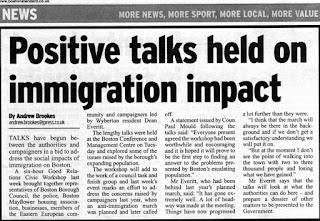 Councillors praised after talks begin on immigration issues - now MP is under fire
It seems that Boston borough councillors have pleasantly surprised members of the town’s immigration protest march group with their positive approach at the first meeting of the Task and Finish group set up to discuss the issue.
The group met for the first time last Thursday, and will continue to do so over a seven month period.
It follows another meeting earlier in the week of something called a Good Relations Civic Workshop, involving the council, Boston police, Mayflower Housing, local businesses, members of the Eastern European Community and the protest campaigners -  whose leader, Dean Everitt, said afterwards that a lot of headway was made (see picture above)   ... and he was equally pleased after the Task and Finish meeting.
On the protest marchers' Facebook page, he told supporters: “I think it went really well - a bit fiery at times, but then we were never going to agree on all points.
“We’ve managed to get six key stages to look at, some local, some national - the main one being immigration …
“The council have now taken these points to see where we can take direct action and solve issues and others where we need to lobby government to get them to tackle the issues. The council are also going to invite an immigration minister to Boston to put issues to him, so hopefully this will start to put pressure in the right place.
“The council have also agreed to contact other councils within Lincolnshire to see whether we can get a joint effort on major immigration issues i.e. Spalding, Wisbech, etc - so things are looking good at present.”
His comments were backed by other protest group members.
One said: “Really surprised, especially with councillors. I think they really listened and realised there’s a problem. Came away feeling really positive. Well done everybody (that includes council.)
Another member wrote: “I too thought they were there to listen, and hopefully they will start working towards minimising the problems we have.”
A third commented: “I was reasonably surprised with the councillors as well, and when you think last year they were saying Boston doesn't have a problem etc, they know now - and that’s a good step forward! We know things ain’t gonna happen as fast as we'd all like them to, and that we'll never completely solve the problems, but if we can improve them as much as possible then it will all be worthwhile.”
Meanwhile, local MP Mark Simmonds, whom many group members feel is not doing enough on the immigration issues, is coming under mounting pressure.
All protesters are being urged to e-mail him, and Mr Everitt has started the ball rolling.
He tells the MP: “Since our last meeting I did rather expect you to show a little more interest in the problems Boston faces with mass immigration, however, you have not.
“On our last meeting I explained that Boston was a town that was close to breaking point. I feel that you didn't take this as serious.
“Since our last meeting things have got worse with yet another murder in the town. Jobs are still in very short supply and even more so if you are English. Schools are still struggling, so are the police, and the hospital is still under pressure.
“I see from a recent local paper that you and Mr Bedford have been to ask for further funding for Boston. This, I feel, will be like throwing petrol on a fire, and you will only improve things short term, and looking further ahead you will be making Boston’s problem worse as more will flock to the town. "I feel that as you are a Boston/Skegness MP you should be fighting for a cap on immigration on our behalf…
“I would like to see you attend one of our task and finish meetings so you can hear from other Boston people and get their opinion on the town so you are not only hearing my side. The invite is here for you to accept.”
One question that we would raise is to ask how the Task and Finish group will approach the issue. At this stage, it is fair enough to involve only councillors and members of the protest march group.
But will this be extended to include other groups and individuals around the borough?
Time will tell.
in the meantime, congratulations are clearly in order for the councillors on the Task and Finish group who it seems have got things off to a satisfactory start.
We would like to mention them individually, but although we contacted Boston Borough Council on Friday afternoon to ask who the group’s members were, we did not receive a reply.
However, on Monday afternoon an "account" appeared on the council's website mentioning the Centre for Good Relations meeting last Tuesday, also referred to Thursday's Task and Finish meeting , and named Labour group leader Councillor Paul Kenny as Chairman of the group.
He said that they planned to begin gathering evidence in March and April before entering an implementation stage late April/May, and that recommendations "aimed at creating harmony" would be monitored closely during the life of borough council, until 2015

You can write to us at boston.eye@googlemail.com   Your e-mails will be treated in confidence and published anonymously if requested.
Our former blog is archived at: http://bostoneyelincolnshire.blogspot.com
Posted by Boston Eye at Tuesday, February 14, 2012