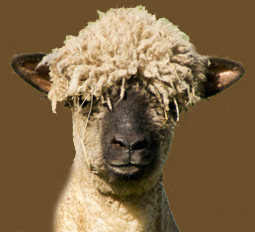 You may feel sheepish, but please don't try to pull the wool over our eyes!
Don’t you just love it when  some councillors decide that you are so stupid that you will fall for any daft line they care to utter.
This week’s local “newspapers” contain some interesting examples.
First there is the boast that council tax will not be increased.
This is not the big act of generosity that it appears to be – the government has told councils to freeze council tax – and not only that … they are giving them money to cover the cost if they obey.
At the town’s crematorium there is mention of a £450,000 bill for replacing the cremators – but little mention that this is a legal obligation, rather than part of any improvement scheme.
But we particularly liked a couple of ideas that have been floated to persuade us that in one case giving away assets worth tens of thousands of pounds is a good idea, and in the other that some of the people to be hit by car parking charges for the first time actually want it that way.
Both issues are connected.
The first concerns the announcement that the 281 staff and 32 councillors at Boston Borough Council will continue to receive free parking in the town’s car parks.
We suspect that many of you will be surprised to learn that they did.
A season ticket for a year’s parking  costs £328 - so giving them away to 313 people costs the council £102,664 in lost earnings.
Boston Town Centre portfolio holder Derek Richmond is quoted as saying that the recipients had been let off “as it was thought they had faced enough hardship recently, accepting a two year pay freeze and dealing with other restrictions.”
Meanwhile, Councillor Raymond Singleton-McGuire – who drew up this year’s budget – added: “They have taken a hit and they have been restricted.”
We wonder how it is possible for two senior councillors completely to overlook the fact that in this economic crisis we have all “taken a hit.” Many people have lost their jobs, wages in many other areas have been frozen as well, interest rates relied on by retired people to supplement their pension are yielding next to nothing by way of returns - so the staff at Boston Borough Council are by no means unique.
In an ideal world, parking would be free for everyone.
But not only is it already expensive, the price is going up as well – and it is morally wrong to impose increases totalling £166,000 in a full year on the hoi polloi whilst excluding a group which could contribute another £100,000 simply because they are members of your club, and you don’t want to get on the wrong side of them – which is what this really boils down to.
According to the reports, free passes allow the holders to park when they are on civic duty.
Presumably this refers to councillors – and we have to wonder how often such “civic duties” include a shopping spree in the town centre.
If the argument for retaining free passes is faintly plausible but very thin, then try this one for size.
According to Councillor Richmond it would be “discriminatory” not to charge disabled blue badge holders to park.
Doing so will raise £80,000 a year – described as “vital” income.
Again, overlooking the fact that £102,000 is even more “vital” which is why it shouldn’t be thrown away, Councillor Richmond is quoted as going on to say: “If an able bodied person pays for a parking space, why shouldn’t a disabled person? They have a disability – 99% of them do not have a financial problem.
“Disabled people do not like to be discriminated against.”
Again, the argument that most disabled people can afford to park is perfectly reasonable – but the rest is so crass that it beggars belief.
Hands up, Councillor Richmond, if you can find one disabled person prepared to agree that paying for parking rather than getting it for free counts as discrimination.
What poppycock! What utter tosh! What drivel!

If some councillors feel a bit sheepish about their feeble justifications, they should not add insult to injury by treating us like imbeciles who are so daft that we’ll take their word for it.
But the greatest irony is that an authority which is led by Conservative politicians - whose party mantra is “we’re all in this together” - has decided that being “in it together” excludes Boston Borough councillors and their staff.

You can write to us at boston.eye@googlemail.com   Your e-mails will be treated in confidence and published anonymously if requested.
Our former blog is archived at: http://bostoneyelincolnshire.blogspot.com
Posted by Boston Eye at Tuesday, February 07, 2012