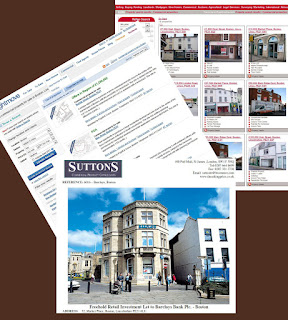 So many businesses want to leave ... Something must be done - but who is going to do it?

We mentioned last week the appearance of yet another long established local business in the commercial property for sale section of our local newspapers.
At the time we noted that just one agent had no fewer than sixteen shops and business on offer – which struck us as rather a lot.
Obviously, businesses turn over just as jobs do, but we decided to look further into the figures – and what surprised us was the amount of property and land that is on the market.
Some examples of land included
It has long been acknowledged that Boston needs more housing.But new homes come at a price in terms of added population which increases the pressure on local services such as schools, surgeries and hospitals – all of which are already stretched to breaking point.
Then there is the issue of gaining approval from organisations such as the Environment Agency, which still clings to the belief that Boston will sink beneath the waves any day now – and as a result often opposes new building plans, which further discourages would-be developers.
In terms of commercial property on the market, there is a worrying story beneath the surface.
A cursory glace through the lists shows
Many of these sites and premises have been on sale since Noah was a lad, and what these figures declare is that no-one apparently wants to build in Boston, whilst many businesses are anxious to leave.
The slightly complacent approach adopted by the powers-that-be is to point to the relatively low number of vacant shops in Boston town centre.
A year ago Boston was listed as the best of a bad lot in Lincolnshire, with a 7% vacancy rate.
But if any of the local businesses with premises on the market tire of waiting, and decide to leave rather than soldiering on until a sale materialises, the picture could become very different.
We see the 7% vacancy rate as the tip of an iceberg –  with far more below the surface in terms of people who want to sell up and go.
We understand that Boston plans to bid for a share of the cash put up following the report by Mary Portas into the decline of our town centres.
A dozen cash grants of £100,000 are on offer to 12 councils which come up with the best ideas, but sadly, Boston’s track record is not what it could be.
The laughable My Boston project was launched after the borough was given a grant of £52,600 from a £3 million government kitty with the long-term aim to get empty shops open once again.
The project had three strands – in the short-term to decorate the windows of empty town centre shops using vinyl window graphics; to create a community/arts hub in the former Sketchleys and Card Fayre shops;  and to give a grant to help a new town centre business pay its business rates for the first year.
Strand One never happened because it was too much trouble; the second swallowed up all the money due to council ineptitude … so nothing was left for the third.
All we ended up with was a not very exciting art gallery, and a community hub apparently dedicated to helping us stop smoking, and which no-one ever seems to visit.
Boston Business Improvement District was involved with that project, and we would have thought that it might have shown an interest in the town’s current plight – as so many business are clearly anxious to pack up and go.
But in the way that Nero fiddled while Rome burned, the BID website still looks mainly to the past – except for a list of what’s on events which – aside from an e-commerce event to help businesses develop their websites for internet sales and purchases – includes the JCI President's Dinner … themed as a Mad Hatter's Boston Tea Party … the Queen's Diamon (sic) Jubilee picnic in Central Park, the Boston Bike Night and an exhortation to “enjoy a show at Blackfriars Art Centre.”
The more we explore, the more we get the feeling that Boston is bumping along on the bottom, and that it needs someone to get a grip on local shopping and business issues before the town becomes nothing more than a graveyard for charity shops and mobile ’phone outlets.
Boston BID and Boston Borough Council should be leading the list of organisations addressing these issues – but sadly seem otherwise engaged.

You can write to us at boston.eye@googlemail.com   Your e-mails will be treated in confidence and published anonymously if requested.
Our former blog is archived at: http://bostoneyelincolnshire.blogspot.com
Posted by Boston Eye at Wednesday, February 15, 2012