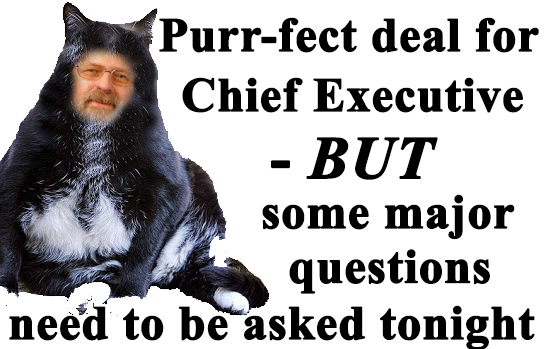 Christmas comes early for the real-life Scrooges of Worst Street – with a recommendation at tonight’s full council meeting of a bumper boost in the allowances of top councillors only and another contract extension for Boston’s highly-paid Chief Executive.
Unlike Scrooge, we suspect that there will be no eleventh hour Damascene conversion to bring about a change of heart – and the recommendation for a 20% rise in allowances to councillors with special responsibilities is particularly ill-timed, coming as it does against a backdrop of reports that as many 120 council staff face cuts in pay and conditions to try to save £1 million.
We mentioned both of these briefly last week – but today want  to concentrate on Chief Executive Richard Harbord’s contract.
It was last extended in September last year “for a further,  final period to 31st May 2013.”
It now apparently suits the council leadership to ignore this decision and propose extending the contract until 31st July 2015.
Sometimes, Council Leader Pete Bedford prefers to fall in with previous recommendations – as he did during the controversy over the sale of the town’s Assembly Rooms.
Councillor Bedford told the BBC:  “… the actual decision was taken in 2006 at a cabinet meeting then, and it has never been rescinded, so the original decision in 2006 is the one that we are actually working on.”
We wonder whether the decision to extend Mr Harbord’s tenure for a “final” time will be rescinded tonight before a vote is taken – but suspect that this will not happen.
Mr Harbord’s pay is well documented.
He will get £121,500 a year for just 15 days’ “work” a month. Pro rata, this places him among the highest paid local government officers in the country – whilst working for one of the smallest and poorest councils.
Boston is ranked 331st out of 354 English local councils.
Not bad for  an official "old age pensioner" – as we believe he is passed his 65th birthday!
At an annualised rate, Mr Harbord receives £243,000 a year – compared with Prime Minister David Cameron, who is paid £142,500.
Mr Harbord is paid through a contract with his own company Mrf UK – formerly Modular Raised Floors (UK) – an arrangement that brings with it certain tax benefits.
Councillor Bedford has been at pains in the past to stress that this also brings benefits for Boston Borough Council.
In a BBC radio interview in February last year, he said: “Our Chief Executive is only a part-time position. He is perfectly at liberty to work for other clients on the days he does not work for us. The council’s contract with the company means that the council has no liability for holiday pay, sick pay, national insurance or pension contributions.
"There is also no question of employment rights and the cost arising from that.”
We are puzzled at the way these comments conflict – given   a warning in tonight’s recommendation to the council, which has appeared before.
Under the section “Legal Implications” we are told:  “As the Chief Executive has been employed continuously since August 2009, albeit on a series of short term contracts, he may have statutory employment rights. This broadly means that if he were to be dismissed the council would have to follow a fair and legally recognised procedure for dismissal. If the position were to be made redundant, redundancy pay may be payable.
An earlier version of this caveat includes the sentence: “If an employee does not have unfair dismissal rights, then these steps are not necessary, although with an organisation the size of the council, these steps should not be omitted even where they legally can be.”
This sounds to us to be paving the way for a possible payment – despite Councillor Bedford’s claims to the contrary.
These warnings also carry the implication that failure to renew a contract on expiry constitutes dismissal – which is nonsense.
We have worked on contracts in the past, and the arrangement is quite unambiguous. A contract is drawn up for agreed services, to be provided for an agreed period, and at an agreed rate.
When that time is up – that’s it!
We know of people who have worked on annual renewable contracts which have not been renewed after twenty years – with absolutely no employment rights whatsoever.
This is the advantage of such contracts to the people who hold them – they can work for more than one employer – and  this is usually whythey work under the umbrella of their own company.
However, an interesting line in the council recommendation mentions a “contract of employment for a peppercorn sum of £10 per annum.”
So on one hand, we appear to have an employee on contract, but also with a foothold on the staff ladder.

This is something that needs questioning at tonight’s meeting.
Another worrying aspect of all this is the decision to extend the contract to 31st July 2015 – almost three months after the next local elections.
Ostensibly, this will “allow the current Chief Executive to remain  …  to provide stability and oversee any changes that may occur at the next election in May 2015.”
Superficially, this sounds a good idea, as it appears to presume a change in political control of the council – which would be excellent.
However, what it also does – if Mr Harbord were to qualify for redundancy pay – is to drop that particular time bomb into the lap of a future administration … and allow our present so-called leadership neatly to pass the buck on to their successors.
In recent months, many decisions by Boston’s un-magnificent seven cabinet members have attracted major criticism – including  the sale of the Assembly Rooms, and charging disabled blue badge holders to park.
However, these protests have fallen into the “all mouth and no trousers” category – creating nothing more than noise … and no real action.
In the case of Mr Harbord’s contract, a senior Labour councillor wrote to the Chief Executive of the Audit Commission  – motto “Protecting the public purse” –  to ask for an investigation. The reply was received to say that an auditor would be in touch “shortly."
On 31st October the post of district auditor ceased to exist.
A final point concerns the report to tonight’s meeting.
Its subject is “Role of the Chief Executive.”
And the report’s author?
“Head of Chief Executive’s Office.”
Ought it not have been written from more of a distance?
If no questions are raised about this tonight, then our so-called representatives are guilty of negligence in their duties toward Boston and its council taxpayers.


You can write to us at boston.eye@googlemail.com Your e-mails will be treated in confidence and published anonymously if requested.
Our former blog is archived at: http://bostoneyelincolnshire.blogspot.com