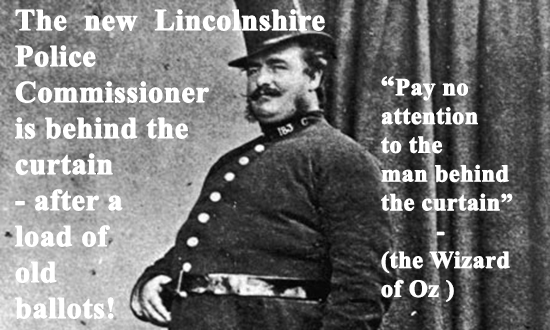 ﻿
Tomorrow sees elections for a Police and Crime Commissioner for Lincolnshire – which are likely to be received with as much enthusiasm as a doubling of the income tax rate might be.
It will see the biggest change for the county police force since it was established in 1856.
A big change, certainly.
But how necessary is it?
Here’s the story so far …
To date, Lincolnshire Police has been overseen by a committee of nine Lincolnshire County Councillors, and eight independent members – one of whom has to be a Justice of the Peace.
That seemed to be a well-balanced set up which kept the police free from political meddling.
But the coalition has decided that a single commissioner, who will replace the police authorities in 41 areas, will improve police accountability, free up officers for front line duties and increase public confidence in the service.
Commissioners’ duties will include hiring and firing chief constables, agreeing budgets and setting local policing priorities.
The turnout for the election is expected to be disastrous – with the Electoral Reform Society estimating that it could be as low as 18.5% … which would be the lowest in British polling history.
Commissioners will be paid between £65,000 and £100,000, depending on the size of the territory – and as one of the five smallest forces, Lincolnshire will get the lowest rate … although even then it remains very high in local terms.
Tomorrow’s election poses a dilemma for us at Boston Eye.
We believe that voting is not just a luxury that can be taken or left on a whim – it is a duty.
But in the case of the elections for Lincolnshire Police and Crime Commissioner there has been a huge communications gap – not just between the candidates and the voters, but from the government, which has done little to set out the “value” of this particular job.
We have four candidates for the Lincolnshire role – one Conservative, two Independent, and one Labour.
Each candidate has skills of their own, and have done well in their chosen careers.
But whether they have what it takes to oversee the running of a police force is a different matter.
We do not think that this job should be a political one, nor do we believe that the duty to vote should be exercised willy-nilly by picking one candidate out of the electoral bran tub just for the sake of it.
We know a number of people who plan to vote for a candidate because they regard him as a “good egg.”
Here at Boston Eye, we have had dealings with two of the four candidates over the years, and whilst we consider them fine fellows both, that is just not enough.
Sadly – and for the first time since we first voted almost half a century ago – we plan to “spoil” our ballot papers.
We shall go to our local polling station, armed with a pre-printed statement, and a mini stapling machine to attach it to our ballot paper.
Our statement will read:


I do not wish to surrender my right to vote, but I do not consider any of the candidates standing today to be electable to the post of Police and Crime Commissioner for Lincolnshire – nor do I believe that the post is necessary in the first place. I attach this notice to my ballot paper knowing that my vote will be recorded as spoiled, and therefore rejected – but will still be counted.  Not to vote is not to care about our society – but to vote for no reason other than to place one candidate above another three is a pointless waste of democracy.


If you feel the same – please feel free to copy and print our declaration and attach it to your own ballot paper.