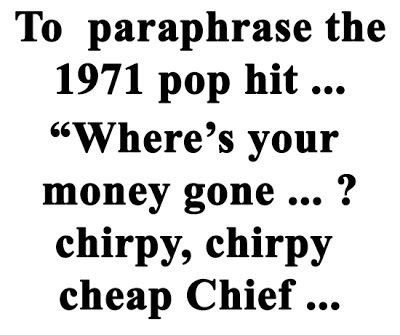 ﻿
How could we have been so silly as to imagine anything other than the big pay rise for big wheels among Boston borough councillors was anything other than an absolutely necessary rebalancing act of fairness?
Monday night’s meeting of the council which saw this – and the extension of Chief Executive Richard Harbord’s gold-plated contract to a date when it becomes another administration’s problem to sort out – both steamrollered through, for once saw opposition councillors reject political rhetoric and say what they really felt for once.
On the wireless yesterday morning, Independent group leader Richard Leggott summed it up thus: “I’ll use one word … crass. It’s absolutely terrible. It’s not as if we’ve got any surplus in our budgets … We’re asking the electorate to be mindful that budgets are thin, services have got to be funded, they may not have the same richness of service – and then for them to see the councillors waving through a large increase over two years for certain members – I don’t think that’s right.”
Labour group leader Paul Kenny was in similar “tell it how it is mode.”
“The big issue that concerns me and should concern the people of Boston is that the administration decided to give themselves a 20% hike on their allowances and at the same meeting were also discussed negotiations to cut the pay and conditions of our staff .
“I just couldn’t believe it – it was a bit like 1st April – what are these people playing about at?
“They’re going to be asking to reduce their services, they’re asking staff to reduce their pay and conditions and the top people in the organisation are technically getting more money. That’s not right.”
He also attacked the decision to extend the contract of Chief Executive Richard Harbord as “the Leader and the Chief Executive getting together and saying I want to stay around for another fifteen months.
“What we want is a plan for the long term sustainability of the council ….  a bit of vision for the future. What we are getting is him propping up the existing administration. He’s agreed to stay around for a couple of months past the next election so that the Conservative group of Boston Borough Council can feel happy that they’ve got everything in place, and that they’re not going to have any difficulties.
“When you make a decision, shouldn’t it be a round decision – not based on one or two factors, but on a lot of factors. And the point that we’d make to the people of Boston is that this decision was only made for the benefit of one political group.”
Enter Boston Borough Council’s political Wile E. Coyote  - leader Pete Bedford – talking as always  like a speak your weight machine.
“Richard Harbord is paid £675 a day. That is it. There is no on cost, there is no pension, there is no pay as you earn, no travel expenses, nothing.
"The average wage of a Chief Executive in an authority the size of ours is £144,000 a year. Put on top of that, anywhere between 26% and 40% pension rights, and pay as you earn on top of it, then all their expenses when they go to seminars and I’ll think that you’ll find that Richard Harbord turns out to be quite cheap.”
He added: “Most of the chief officers at Boston, barring one, are long serving officers, and since Richard has been there their game level has raised significantly because of the support of a very, very experienced chief executive.”
Surely, this begs the question why they were allowed to get away with taking it so easy  – something that might well have continued had another in-house boss been brought in.
On the pay rise for the “top” tier of councillors, Councillor Bedford was indignantly pedantic.
“20% – That is over two years – it’s ten per cent per year, so let’s get that absolutely straight to start with.”
Oh, so it’s just 10% a year, then – well, that’s ok, isn’t it?
“Boston is way the lowest no increase for six years. “Everybody has walked away from this issue and I’m afraid that its time it has to be addressed.”
Well, it would be, wouldn’t it – if  you want to pocket some cash while you still can?
He also rejected Councillor Kenny’s charges about staff on minimum pay.
“Fifteen per-cent of staff are not on the minimum wage – they are actually above it. “We have nobody at Boston borough on the minimum wage, and in fact the average hourly rate is £11.09 an hour.”
It may be true that there are no staff on the minimum wage.
As Councillor Bedford pointed out on Monday night in a written answer: “The national minimum wage is currently £6.19 per hour.  The lowest hourly rate at this council is £6.29 per hour, which is significantly higher.”
Of course it is – a whole £4 a week more for a 40 hour week.
And Councillor Bedford’s rise for that extra responsibility?
His annual increase will be £1,567 – which at the same rate is a rise of £30 a week.


You can write to us at boston.eye@googlemail.com Your e-mails will be treated in confidence and published anonymously if requested.
Our former blog is archived at: http://bostoneyelincolnshire.blogspot.com