In a classic case of closing the stable door after the horse has bolted, Andy Fisher, Boston Borough Council’s head of Housing, Property and Communities, earlier this week e-mailed staff and councillors to let them know that the public toilets beneath the Assembly Rooms would close tonight – just three days after the news was released to the local newspapers. After months of secrecy, he has promised that once the sale is completed, it will be possible to release further information – you know, the small stuff … such as who has bought the building, and what they plan to do with it. And unless all our sources and those of others are also wrong, we believe that one or two people involved in this clandestine deal may prove to have been economical with the truth – to say the least. Meanwhile, traders in the Assembly Room shops were complaining on local radio as late as yesterday that they are still in the dark as to their future, because Boston Borough Council has told them nothing at all. Ignorant – or what?
It seems that the borough is in estate agent mode at the moment, as a deal has also been done with Lincolnshire County Council to transfer its registration service to the borough’s Worst Street offices. For those who like such things, it will be possible from December to get hitched in the council chamber and Mayor’s Parlour – local symphonies in stained glass and polished panelling. As a venue, they mark an improvement on the previous Register Office, which more closely resembled a private viewing theatre that somewhere suitable for a civic union. But at least it was possible to park there without any problems. We wonder whether this has been taken into consideration with the new facility, as West Street is notorious for being a hard place to park, and we feel sure that the borough is unlikely to make any of its free staff and councillor parking available.
Mr  Fisher reassures critics that “both of these property transactions have a positive effect on our current financial position”  – which is probably just as well given that Monday night’s full council meeting is being recommended to hike special responsibility allowances by 20% over a two year period. As usual, the  argument being trotted out is that Boston’s allowances are among the lowest in the country and that bigger payments will attract more people to consider become councillors. Unfortunately the people to benefit under this plan number the 19 most senior councillors such as leader Pete Bedford, who will pocket another £1,567. The deputy leaders would get another £913 and the members of the cabinet £652. You have to admire the nerve of our leaders. It’s only a couple of months or so since the council made the headlines in the Daily Mail for  topping the black list of  allowance hikes with a total of 85% over three years – which was one of the first actions taken after the Tories gained control of Boston in May last year.
Still, the extra money may well come in handy given the latest rise in gas and electricity prices, which have caused shockwaves as winter approaches.  But a chance for us lesser mortals to save as much as £200 pounds a year could be available despite Boston Borough Council thanks to  a scheme being offered by South Holland and East Lindsey District Councils. The scheme works by signing up as many people as possible and then inviting power companies to bid for their custom - with the lowest bidder getting the business.  Gary Porter, the leader of South Holland District Council was asked why only two of Lincolnshire’s seven district councils were involved in the scheme. “We’ve offered the ability to come in to the other districts and we haven’t heard anything back, so we are just pressing ahead with it.” The good news is that if you live in Boston you can still register for the scheme if you apply by 21st.  Just follow this link http://southholland.ichoosr.com/product/index.rails?actionId=253 . The bad – but not surprising news – is that once again the leadership of Boston Borough Council has let its citizens down.
Now for the first and last in our local political lookalikes series! After his recent stunning appearance on film –   in which he trashed local motorists for their parking naiveté –   we were struck by the close resemblance between Boston’s Lord Of the Town Centre, Councillor Derek Richmond, and the Secretary of State for Communities and Local Government, Eric Pickles. What do you think?
For a council that encourages us to demand better and faster internet services, we have noticed some Luddite tendencies creeping in recently. The latest is tucked away in the recommendations for big pay rises for the elite band of “top” councillors. The report notes that there is no provision in the allowance system to support Members’ IT expenses – and therefore declares them to be part of the basic allowance. This leads seamlessly to the decision that in order to achieve fairness and consistency, the current arrangements which provide members with IT connections and consumables via the council should cease immediately.  The pompous wording disguises a simple meaning … any councillor currently supplied with a laptop computer must give it back and in future use buy one from his or her allowances – which have already been declared as pitifully low. In an age when computers and internet access are very cheap, this is an interesting “economy” that will hinder councillors by removing support for essential services and demanding that they pay from their own pockets.
Also coming up at next week’s council meeting – and which is something that we will be discussing in more detail after the weekend – is the recommendation to extend the contract of Boston’s “acting” “interim” “part-time” Chief Executive, Richard Harbord. The plan is that he will now continue in post until after the 2015 elections – which we suspect will make him one of the longest serving chief executives … even though he has never held the substantive post.  Mr Harbord will receive £121,500 a year for just 15 days’ “work” a month. Pro rata, this places him among the highest paid local government officers in the country –  whilst working for one of the smallest and poorest councils. Not only that – at an annualised rate, he receives £243,000 a year – whilst Prime Minister David Cameron is paid £142,500. We are seeking comment on this from a number of organisations... and will keep you informed.
We note that the Boston Business “Improvement” District is bragging that it has negotiated free parking in all Boston Borough Council car parks from 5pm on Friday 30th November for the start of the Christmas Market. What this will cost is unclear … but it has happened before. Whilst we don’t have a date, we note from earlier council papers that free parking for the day in all Boston Borough Council car park represented a “loss of revenue estimated at between £3,000 and £4,000.” At some point, the sums need to be done – and the question of what financial benefit is earned for the Boston from the funding of a Christmas Market  and expensive “star” names must be calculated before we carry out such similar exercises in future.
Our attempts to subscribe to the new, excitingly redesigned Boston Standard have now entered their fifth week. We have been assured that our bank details – and those of many others – were lost merely because of computer problems, and thus unlikely to lead us to become victims of any attempts at hacking or other forms of illegal infiltration, and promised that our direct debit will be taken on or around the 21st November with our vouchers arriving within 21 days. This means that we will have been paying the higher price for our paper for several weeks since we first tried to take out a subscription – but that’s  good news for the publisher isn’t it?


Still with the Standard, and its growing tendency for typographical errors and misspellings, we had to smile at the following, which appeared last week. 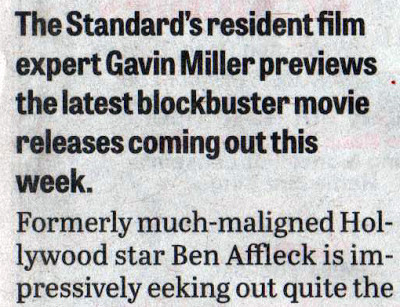 Eeking? Is he making horror films these days? And what’s all this about a “resident film expert?” In our days on local papers, that job was occupied by whoever was lucky enough to grab the free tickets when they arrived. These days a “resident expert” is a luxury on only the leading national   and regional newspapers. They can’t really mean it!
But it does seem that the mauling of the language happens everywhere – as in this extract from a Boston Borough Council report …

“Shall be begun?”  How about “shall start?” Or is that too simple?
Finally, don’t forget that the last of Boston Borough Council’s garden waste collections will end this year with collections scheduled for the weeks starting next  Monday, 19th  and 26th November. There will be a one-off collection in January - coinciding with scheduled collections in the blue bin  week starting January 13th and the green bin week starting January 20th – to help get rid of Christmas trees and late leaf fall. We don’t know about “late” leaf fall – most of ours are still clinging to the trees!


You can write to us at boston.eye@googlemail.com Your e-mails will be treated in confidence and published anonymously if requested.