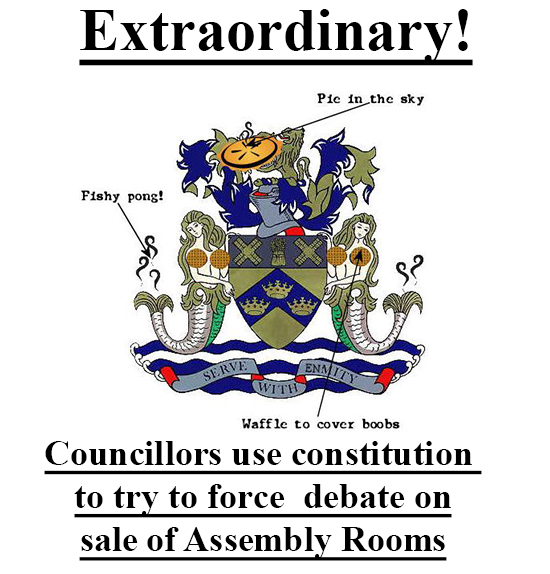 Although the "leadership" of Boston Borough Council behaves as if it can do as it pleases, there is, in fact, a constitution in place so that the council can be held to some sort of account – and a clause in it is now being used to try to force a debate on the sale of the Assembly Rooms.
It comes from Boston District Independent Councillor Alison Austin, who told Boston Eye: “Along with many other borough councillors I am most concerned that the decision to sell the Assembly Rooms has been made by the Cabinet.
“The decision may involve the closure of the public toilets serving the Market Place. The Cabinet seem determined that there should be no debate among other councillors on the matter and the Mayor has refused to allow a ‘call in’ to scrutinise the decision.
“I, supported by others, have therefore invoked a clause in the council constitution demanding a special council meeting to debate the sale and its long term implications.”
The other signatories are fellow BDI Councillors Richard Austin and Helen Staples,  Labour’s Paul Gleeson, plus Independents Ossy Snell, and Carol Taylor.
Their petition to the Mayor, Councillor Colin Brotherton reads: “We the undersigned wish to invoke Clause 3.1(iv) of Part 4 (section A) of the constitution of Boston Borough Council.
“We call upon the Mayor to call an Extraordinary Meeting of Full Council to discuss issues relating to the sale of the Assembly Rooms and the lack of opportunity for members to debate or scrutinize such an important decision.”
The clause concerning calling an extraordinary meeting permits “any five members of the Council if they have signed a requisition presented to the Mayor and he/she has refused to call a meeting or has failed to call a meeting within seven days of the presentation of the requisition.
Councillor Austin explained: “The decision to dispose of one of Boston’s most prominent buildings together with the only public toilets in the Market Place has been made by just seven councillors.
“I was appalled that such a momentous decision was railroaded through without any chance for scrutiny by other councillors.
“It could have been thought of as ‘a good time to bury bad news’- just at the start of the holiday season and the opening of the Olympics.
“How can such a decision be classed as ‘time sensitive?’ That smacks of bad management; something we’ve come to expect from this administration.
Interestingly, as far back as January, it was reported that three potential buyers were interested in the Assembly Rooms, which raises questions of why the sale had to be rushed through as a matter of “urgency” more than six months later.
There is also the matter of the price.
The building has been on sale for £445,000, and the council will be imposing a covenant on the purchaser demanding that the Assembly Rooms must be redecorated outside within the first 12 months and every then every five years. The colours and materials must comply with the listed building requirements.
It’s reckoned that this will cost around £150,000 – and whether the cost has been taken into account with the asking price is not known.
A previous attempt to offload the building into private hands four years ago ended in failure - when councillors rejected a plan to turn it into a night club.
This time around, though, it’s thought that the council won’t be so fussy, as dumping the building that it has systematically neglected for decades is now the priority – rather than any concern about the public impact of such a move.
Another unasked question is what the council will do with a possible windfall of nearly half a million pounds.
So far, the Conservative leadership has demonstrated a particular flair where wasting money is concerned, and it is to be hoped that if nothing else, a careful watch is kept on how so much money is spent.
What a shame that all this should be happening in the 190th anniversary year of the building’s opening.
Talk of the council’s constitution made us think of the borough’s coat of arms – and it is with a deep sense of regret that we have decided to republish our take on the borough’s coat of arms – which first appears more than four years ago.
We first highlighted the pie in the sky, the fishy smells, and the waffle to cover boobs as a critique of the late BBI style of management.
But  now it seems that the wheel has turned full circle – and with hindsight  the BBI was perhaps not as bad as it seemed.
A definition of the various symbols which appear in the coat of arms  includes the information that the motto Serve With Amity “applies especially to public relations.”
Given the way that the Tories have roughed up the people who elected them since they tricked us into voting for them – we feel that our amendment Serve With Enmity is far more apposite.