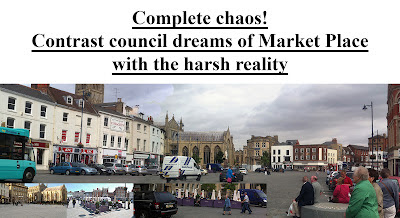 It seems that the chaos in Boston Market Place increases in some sort of perverse ratio to the growing number of complaints about it.
Friday saw us in the Market Place along with many other pedestrians trying to pick their way around cars that were parked where they shouldn’t be, whilst at the same time trying to dodge moving vehicles which were meandering around the area without any real sense of direction, and whose drivers clearly didn’t feel any empathy with those on foot.
The situation is an accident waiting to happen, and whatever fancy plans were drawn up to create one of the first examples of a so-called a "shared space" - where the impact of traffic is reduced, has gone out of the window … if ever it existed.
The thousands of stone setts enjoyed only a brief moment of pristineness. Now they are scarred by skid marks and stained with oil.
The lightly marked areas denoting where parking was allowed were soon disfigured by painted white lines because the builders failed to realise that they were hard to distinguish in wet weather.
But as is so often the case, Boston Borough Council’s “leadership” adopts the jam tomorrow approach.
The council line is that at present, the police are responsible for parking enforcement in the Market Place – but aren’t doing it.
However, it will all come right later in the year when Lincolnshire County Council takes over parking enforcement.
A couple of months ago, the borough issued a news release condemning illegal parking in clear defiance of new signage which states the newly-marked bays only should be used.
The signage was half-heartedly lugged into position for a short while, then the signs remained piled up against the wall of the Ingram Memorial - and by last Friday had disappeared completely.
Although it is claimed that the parking situation will “dramatically” improve once the County Council “takes over” parking regulation, we are inclined to doubt the promises made by various portfoolio holders.
The scheme will cost approximately £1.1 million a year, for which we will get 20 parking wardens who are expected to issue tickets totalling £940,000 a year. The loss will be shared between the county and district councils.
Incidentally, those 20 parking wardens are for the whole county, and no one seems to know how many – or rather how few will be employed in Boston.
Somehow, we can’t believe that there will be an improvement of the dramatic scale promised.
Nor is the County Council actually taking over parking enforcement. In June it awarded the contract to APCOA Parking (UK) Limited, which handles everything from phone calls to the issue of season tickets, registering debts and calling in the bailiffs.
It sounds certain to be popular.
Between now and APCOA’s arrival sometime in October, it looks as though Boston Market Place will continue in its present mess.
But we fervently hope that someone in Worst Street will try to get a grip on the situation in the interim. The cars drive where they please, as do the Into Town buses, and now that the area is more open, they appear to be going faster. Did anyone ever think to discuss the need for greater care with Brylaine’s drivers when the area became a free for all zone.
Our photo at the top of the page says it all – and you can click on it to enlarge it.
The big picture shows the state of play on Friday -  and the three smaller one show the council’s idyllic depiction of the Market Place and  the Continental ambience, and finally, our own photo of what life al fresco is really like – hemmed in by cars.