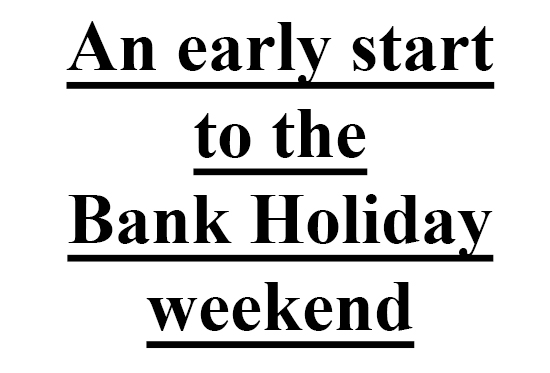 We’re slipping into holiday mode a little early, with a version of Friday’s Week Ending feature appearing a day ahead of schedule, as we know that many of you enjoy a long weekend over the August Bank Holiday period.

Our pieces  this week about the chaos in the Market Place stuck a chord with new reader Sandra Overton, who e-mailed to say: “ I could not have put it better myself. I was in the fiasco of Boston market Place on Friday and a lady in front of me almost got scooped up by a car coming out of Bank Street thinking he was on a race track. Several pedestrians said – ‘AN ACCIDENT WAITING TO HAPPEN.’ Where are the signs to say that one should only park in marked bays?  I could not find one. As for the buses … that’s another story. I only found your site last week being told of it by a friend. It's brilliant. Keep up the good work.”
Talking of the Market Place chaos, we saw this photograph the other day and it occurred that if our “leaders” were still looking for ways to make life even more difficult for Boston pedestrians and shoppers, they might consider this as a next big step. 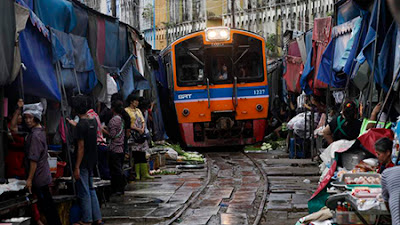 The photo was taken in Bangkok, and shows shoppers and stallholders fleeing from the path of a regular train service that runs through a market. A bit like the Into Town bus service, the train sounds a warning just one minute before rolling through. Once it’s gone, the traders and shoppers carry on with life as normal. We’re sure that our leaders would see it as a “visitor attraction.”
Still with the Market Place, after Monday’s mention of the now-you-see-it, now-you-don’t petition against the closure of the Assembly Rooms, the absent petition appeared as if by magic.  Thanks for letting us know, Boston Borough Council. Unusually – and doubtless because of the dubious  urgency surrounding the sale, the petition will close relatively soon – at the end of next month, so it’s as well to hurry if you want to join the seventeen people who have signed so far. You will find the link here.

Among the comments left on the site,  we felt that the one reproduced above summed things up best of all.
During the week  we mentioned the appointment of Civil Enforcement Officers – that means traffic wardens  – by the firm APCOA to police car parking for Lincolnshire County Council from mid October. Boston is one of only eight towns where vacancies are being advertised. The others are Sleaford, Louth, Skegness, Spalding, Stamford, Grantham and Lincoln. There is no indication as to whether more than one post is required at any of the locations, but given the hours needed, we would think that a single post holder would be a little stretched. No pay scale is mentioned, but a similar job in the south of England is offering £13,603 to £14,331 a year. There are just four weeks left in which to apply. It has a cheap and nasty feel about it, and somehow we don’t expect the dramatic solution that has been promised for Boston’s parking problems to be very likely.
A recent response to a complaint that a couple of Boston Borough Councillors had breached the Members Code of Conduct by not declaring relevant interests on their Declaration of Pecuniary Interest registration forms, has produced mixed results. One concerned Councillor Derek Richmond and his directorship of Boston Business “Improvement” District. The decision by Chief Executive Richard Harbord was that as he received no remuneration he didn’t need to declare his appointment. It may be true, but it still fails to address the difficult situation that Councillor Richmond may well find himself in  as a director at future BID meetings – which Mr Harbord insists is where his first duty lies ...
The second complaint referred to Councillor Yvonne Gunter, who we see from this week’s local “newspapers”  has now added Sport to her “leisure services, parks and open spaces, country parks and reserves, playing fields, tree management, crematoria and cemeteries, allotments and grounds maintenance” portfolio. Councillor Gunter had declared no employment on her form – although elsewhere on the internet her services are available as “Lincolnshire’s Premier Wedding Planner.” Mr Harbord reported:   “Having communicated with Councillor Gunter, it appears there was an oversight on her registration form in respect of her occasional work as a wedding planner.  This has now been corrected and I thank you for your vigilance in bringing this to my attention.” 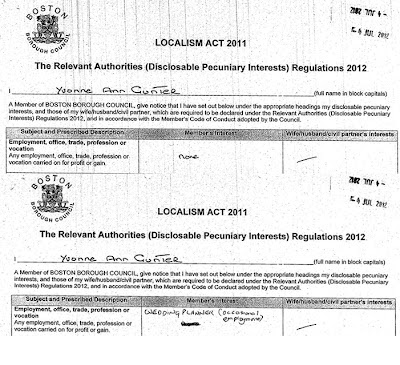 Things such as this highlight a need for vigilance – and also clarification. Although all councillors received guidance concerning what should go on these forms and what should not, there is still confusion. Quite a number of retired councillors – and there are quite a number of retired councillors – declare their membership of Boston Borough Council as an “employment, office, trade, profession or vocation,” whilst others do not. If the ones who make such a declaration are wrong, then it should be removed. If, however their declaration is appropriate – then the others need to come into line.
What are we to make of the latest titbit from the Lincolnshire Research Observatory that the latest census releases show that Boston’s population increased by 15.9% between 2001 and 2011. This is more than 50% higher than the county rate of growth. and twice that of the national rate. Boston experienced the largest increases in its population in the age bands representing people in their 20’s. Theoretically, this creates a case for  more central funding, but it also fuels the argument put forward by groups who want a cap on inward migration. It will be interesting to see what Boston Borough Council has to say about it.
Amidst the debate on the closing of the public toilets in the Assembly Rooms, we noticed a potential relocation site which people might use without noticing the difference. 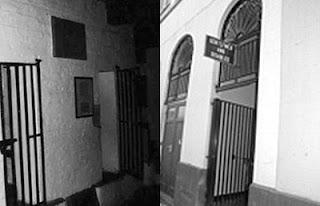 At first glance, can you differentiate between the toilets in the Market Place and the cells in the nearby Guildhall, where the Pilgrim Fathers were not briefly imprisoned before their flight to the Americas? If you’re puzzled, the cells are on the left and the loos are on the right … or is it the other way around?
As we said at the start, we’re heading into holiday mode a little early, as we know that many of our readers take a longer break at the end of August. We won’t be publishing again until Wednesday 29th August – but we are not on holiday. If you would like to e-mail us with information or questions, we are here to help. And if anything interesting crops up before Wednesday, then we hope to be the first to tell you. Have a great break.