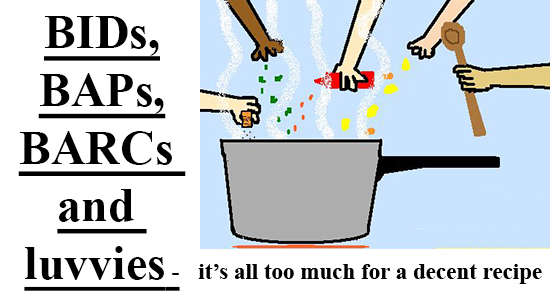 The phrase too many cooks spoil the broth could well become a mantra for Boston if we get many more good-doers.
Yesterday, we mentioned the Hollywood treatment that the town is getting through the Alchemy Project - which is to spend a year and at least £70,000 on films, poems and the like to solve the town’s tensions over inward migration.
Meanwhile, a similar project costing £2.5million over three years will see large photographs stuck on the sides of local lorries criss-crossing Europe, and “art” taken to the remote villages.
Two such projects sound like one too many to us, but there are other organisations as well which are trying to “promote” Boston.
Principal among these is Boston Business “Improvement” District – which is about as much help to business improvement as a bicycle is to a fish.
And in poking around we also stumbled across the almost forgotten but apparently still active Boston Area Partnership.
We say “apparently” still active because – although its website is out of date – it has a community plan covering the period between 2008 and 2018, and was certainly alive and kicking according to Boston Borough Council’s website a few months ago.
BAP was launched in 2002 and brings together the major public service providers in the area, such as the police, NHS, Boston College, Boston Borough Council and Lincolnshire County Councils, together with representatives from the voluntary and community sector and private sector.
Its aim is “to improve the local quality of life and regeneration of the Borough through improved planning and delivery of services and activities” – which is what we thought the council was supposed to be doing!
BAP’s mission statement says: “Overall, our vision is for Boston to be a more modern, vibrant and dynamic place to live, work and visit - a better destination for residents, shoppers, visitors, commerce and industry.”
It describes Boston’s six ambitions as a capital letter intensive: “Getting Around, Making Boston a Destination, Generating Prosperity, Feeling Safe and Part of Your Community, Being Healthy, and Creating a Greener and More Sustainable Future.”
Boston BID meanwhile – which costs local business £130,000 a year through an enforced levy -   pledges such esoteric goals as:  “safe and secure, perception and image, clean and attractive, accessible, a voice for business support, and delivery of match funding.”
Apart from the latter, which doesn’t seem to have happened, the two lists seem broadly comparable, and in fact overlap in some areas.
We know how much BID costs - and the lack of matched funding means that the lion’s share of its income is spent on staffing and administration.
But what about BAP?
Its list of executive board members is hopelessly out of date, and one of the liaison co-ordinators is listed as “BAP/BARC Support Officer” at Boston Borough Council. – That’s despite the fact that BARC – the Boston Area Regeneration Company set up in 2006 – was wound up last year just weeks after being condemned by Audit Commission  inspectors who found that it squandered money on feasibility studies rather than actual projects.
“BARC represents poor value for money as a means of delivering the economic development and wider regeneration aims of the borough,” the commission said.
“It is a significant weakness that value for money of the first three years’ operation of BARC, and its £400,000 running costs, has not been regularly reviewed.”
All told, it’s a pretty unsettling picture.
We have a council which is supposed to have a vision for Boston, working with two other organisations, one of which is achieving little or nothing at considerable cost, and another which appears to be in semi-hibernation with a document library that is years out of date, and minutes of some meetings as old as April 2010.
Leaven that lacklustre recipe with some less than glittering movie making and a multi-million pound poster campaign and what have you got?
A clear need for a drastic reappraisal of how Boston is promoted for the future.