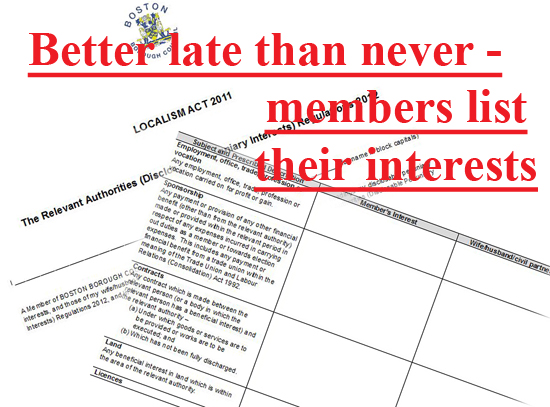 They’ve appeared on Boston Borough Council’s website almost a month late, and only after some prompting from Boston Eye­ – but at long last the register of councillors interests is there for all to see, and without the need to go crawling cap in hand to Worst Street to ask.
Given that the list is a legal requirement, and was promised by council leader Peter Bedford as far back as March 1st, we wonder what took so long – particularly as the forms weren’t sent out until the last week of July.
Anyone expecting exciting revelations will be seriously disappointed.
Interestingly, exactly half of the borough’s 32 councillors declare an occupation of some sort – which means that the number of those in the leisure classes is certainly higher than the average.
Quite a few declare more than one property – though not in a business sense – and relatively few seem to work in a sphere that brings them in regular contact with ordinary people.
Far and away the biggest owner of business property is joint deputy leader Councillor Raymond Singleton-McGuire with no fewer than 20 separate addresses listed on his declaration – plus twelve companies under his belt with interests ranging from furniture to aviation and wedding services.
Interestingly, although she lists no employment on her declaration, Councillor Yvonne Gunter does appear as “’s Premier Wedding Planner” on Councillor Singleton-McGuire’s “SMG Wedding Services website.
Perhaps the joy on the faces of the bride and groom is sufficient reward in itself!
Independent Councillor Richard Leggott, takes the gold medal for style when it comes to listing land ownership.
Mere addresses are insufficient; instead he lists no fewer than 16 parcels of land by their Ordnance Survey references and National Grid number!
As we said at the outset, there is nothing earthshaking in the declarations.
But it does paint a picture of a council with rather too many people with nothing but time on the hands – and too few with a hands-on approach to ordinary life.
It is however, a step towards greater transparency, and it now joins the members’ attendance records as a way to learn more about our representatives.
Again, as you might expect with so many leisured members, most of them score highly where attendance is concerned.
In broad terms, the party poopers would appear to be the English Democrat members Councillors David Owens and Elliott Fountain.
This is especially noticeable where attendance at the Boston Town Area Committee is concerned, as this is the town wards’ “parish council” and thus a good platform for members to press their own local causes.
According to the council’s records, English Democrat group leader councillor Owens last appeared at a BTAC meeting a year ago, whilst Councillor Fountain’s most recent listing is for the meeting last December.
As an aside, we note that Councillor Fountain, who is putting himself forward as Police and Crime Commissioner at the elections in November, was one of last week’s defeated candidates in the by-election for the Lincolnshire County Council seat for Lincoln East.
The seat was won for Labour by 71 year-old Robin Renshaw, who stormed to victory after scooping almost 50 per cent of the vote – although the turnout was a disappointing 18%.
The full result was Robin Renshaw (Labour) 563, Simon Parr (Conservative) 314 John Bishop (Liberal Democrat) 95, Pat Nurse (UKIP) 79, Nick Parker (Socialist) 79, Elliott Fountain (English Democrat) 24.
Incidentally, if you wish to peruse the full list of “Councillors' disclosable pecuniary interests” you can find it by clicking here as it is a little hard to find on the borough’s website.