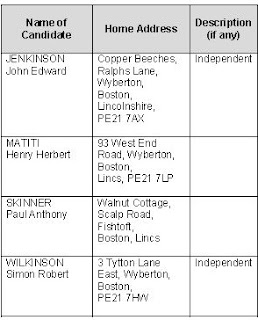 We were interested to see that our Lincolnshire County Conservative Councillor for Boston South, Paul Skinner, is standing as a candidate for Wyberton Parish Council next Thursday.
We also noted that Councillor Skinner – who stood unsuccessfully for the borough council in the same ward last year as a Tory candidate -  is not affiliating himself with any political party this time around. In a slightly mischievous way, we e-mailed him to ask whether this might be because a declaration as a Conservative could be deemed counterproductive to the chance of success! We think we may have struck a nerve – as we have received no reply!
Just when we thought that green waste collection service was shaping up nicely comes news that overloading of the brown wheelie bins has become a “slight” issue. The bin weight limit is 80 kilogrammes - and if they’re heavier than that they can be damaged when they are tipped by the collection lorry's hydraulic lift. Boston Borough Council tells us: “Green waste alone will not cause the bin's maximum weight to be exceeded, but the addition of soil may. Gardeners are asked not to include soil, knock it off the roots of weeds, plants and shrubs before they go in the brown bin and do not include lawn edgings.” Surely, lawn edgings can be included so long as they do not exceed the upper weight limit – or are we seeing the start of a selective policy on what may or may not be disposed of?  Either way, what a shame that once again a council project has been marred – presumably by using cheaper bins that are not now proving up to the task.
After our remark last week that we found it difficult to reconcile the word worshipful  - "feeling or showing reverence and adoration, entitled to honour or respect" -  with some of our mayoral office holders, we received an e-mail from Independent Councillor Richard Leggott telling us that “the French translation of our 'The Worshipful' is ‘L’adorable.’  I found this out in , and don't know quite what this does to French thinking about those strange English and their strange customs!” To us it provides an even greater challenge of reconciliation!
Finally, after recent headlines about ongoing problems at ’s , a frisson of fear ran down our spine when we saw the latest in this week’s Boston Target.

If these cards are needed in the orthopaedic department – be afraid, be very afraid!