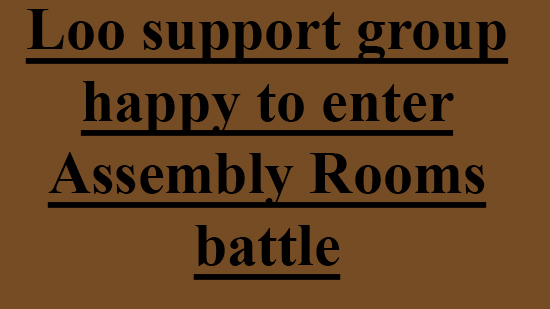 If the leadership of Boston Borough Council thinks the outcry over the secret sale of the Assembly Rooms will go away if stick their fingers firmly in their ears and bury their heads deeply enough in the sand, then they could be in for a disappointment.
The Assembly Rooms issue is a game of two halves – of the building – about which we will have more in tomorrow’s blog – and the retention of the public toilets as an essential facility for local people.
It was only reluctantly that Council Leader Peter Bedford confirmed the sale of the building to our local newspapers, after an earlier report in Boston Eye.
The press and public were excluded from the cabinet meeting on 25th July where the decision was taken on the grounds that the discussion involved the likely disclosure of exempt information.
Afterwards, a council spokesman said no details of the discussion would be released due to “commercially sensitive” information.
But once his hand was forced, Councillor Bedford told the Boston Standard that the building - on sale for £445,000 - had been sold, subject to contract, and that the cabinet took the decision rather than the full council due to “urgency” – with the Mayor ruling against any attempt to “call in” the decision … which would have referred it back to the whole council for debate.
This struck a hollow note with many people – particularly as the full council was meeting that very same day.
And questions are now being raised about why – since urgency was so paramount – there is still no sign of any planning application for change of use of the building ... which  was listed 63 years ago, making it one of the first in the country to be so.
Meanwhile, Independent Councillor Carol Taylor has received an offer of support from an interesting source in her campaign to save the public toilets from closure.
Gillian Kemp, a member of the management committee of an organisation known as the British Toilet Association www.britloos.co.uk   has been in touch to say that she read about the problems of the Assembly Rooms and the public toilets “with dismay.”
Ms Kemp says that: “When public toilets close down there are many health issues that can arise which affect a large proportion of the population.  If we are to embrace the government’s idea of an all-inclusive Big Society, public toilets are a necessary requirement for our future health.
“In the Nineteenth Century,  public toilets were introduced and the UK had the best toilets in the world.
“In the Twentieth Century public toilets could be found in a wide variety of locations – parks, seaside, towns, cities – some with child friendly facilities.
“In the Twenty-first Century 40% of public toilets are now closed and the UK is no longer has the best toilet provision – although there are regional variations.  Communities and transport systems are being built without toilet facilities.”
She says that a lack of public toilets ignores a basic human requirement, affects peoples’ quality of life, incurs additional costs and affects the local economy. Among the advantages of public toilets are their contribution to the sustainability of communities, supports for a 24 hour economy, higher retail turnover, and more visitors.
Ms Kemp told Councillor Taylor: “Please don't give up the fight! If I can help further in any way, don't hesitate to contact me.
We wonder how our non-listening leadership plans to handle this latest debacle.

You can write to us at boston.eye@googlemail.com  Your e-mails will be treated in confidence and published anonymously if requested.