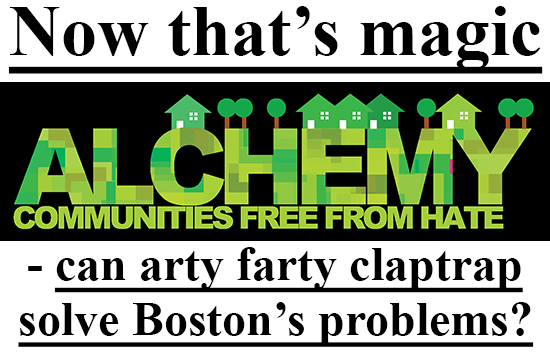 We wonder whether the dismal bank holiday weekend could have been brightened had we taken up Boston Borough Council’s invitation to “Come join (sic) us for two walks in and around Boston as we explore Boston's history, past and present, and look at the many changes to the town over those years.”
Whilst the inference is that the council was organising the event, it was in fact the work of something called The Alchemy Project “about breaking down barriers.”
From February this year until March 2013, the project is engaging with a wide cross-section of Boston's culturally diverse communities as it attempts to unravel the myths, misunderstandings and prejudices associated with new arrivals into the town and its surrounding area.
On the group’s website, this included a 20-minute video in which contributors appear in a window within the main picture talking about Boston and the impact of immigration – and comprise a number of the “usual suspects.”
Watch it and you will see what we mean.
A Lincolnshire-based  organisation called cultural solutions uk  (no capital letters) is devising “a bespoke programme of creative activities including creative writing, film making, drama, dance and music” … “to develop confidence in people so they can learn new skills; express themselves through the arts and ultimately make new friends."
Behind this scheme is JUST Lincolnshire, the county’s “equality and human rights organisation,” with funding from the Community Development Foundation - a government quango with £80 million to burn -  plus another £70,000 from the Home Office.
The Alchemy team includes a creative writing facilitator, a film maker, Lincolnshire’s poet laureate, and an arts development officer.
Regular readers will know our views on this sort of thing – frankly we can’t see how it will achieve anything.
And of course, it is running in tandem with a three-year arts project for Boston and South Holland which won £2.5 million from the Arts Council to take art of all forms to the community and into often isolated rural areas where access can be limited.
The main focus of this project is to display big photographs on the lorries that travel to and from Europe, connecting our local work force with the places and cultures they visit.
If you can think of better ways to spend this sort of money, then please don’t write and tell us, as we are sure that it would take too long to read all your e-mails!
We felt that the title Alchemy seemed a little unkind, as the general definition of the word refers to turning base metal into gold – and whilst Boston certainly needs pulling up by its bootstraps, we don’t believe that it has sunk so low as to be considered base.
All this stuff seems to be a cockeyed approach to improving relationships between the indigenous population and the migrant community, but -  whilst it will clearly keep a whole host of luvvies in work -  we don't see it achieving much else.
According to one report, the borough council task and finish group into immigration was set to publish its findings by the end of this month – i.e. Friday – but another account says that it will not be until September.
Meanwhile, the Boston Protest March group is again becoming restless – as it did around the time of the final meeting of the group.
It is proposing a static protest this time – and Boston Borough Council is again putting obstacles in the way … as it did at the meeting  on holding a protest march at the end of June.
“The response from council is not good, as it has given us too many hoops to jump through - one being insurance, which we have no funding for,” wrote organiser Dean Everitt on the group’s Facebook page.
Reaction from fellow members was to accuse the council of trying to fob the protesters off, and also of lying - as it appears that insurance is not a requirement for a static protest.
The last time we looked, a meeting had been called for the end of the week to discuss such a protest – with the rallying call “so let the planning commence.”
Are we alone in thinking that the gulf between what local people feel, and that  solutions such as making films and writing poems to bring the community together is far too wide?

You can write to us at boston.eye@googlemail.com  Your e-mails will be treated in confidence and published anonymously if requested.