Yet again, Boston is in the headlines for all the wrong reasons. A report in Wednesday’s Daily Mail  – and read by millions more on the newspaper’s website – put  Boston at the head of a list of the  “Dirty Dozen” councils paying themselves colossal increases in allowances. “What recession? Councillors give themselves 'completely unjustifiable' 28% pay rise,” proclaimed the headline. ﻿
﻿﻿
The story added that the increases had been condemned by local government minister Bob Neill as “completely unjustifiable.” Nonetheless, council leader Peter Bedford made a lame attempt, claiming that allowances for the authority “lagged far behind all others in Lincolnshire”  - which may simply be because our leaders are worth less … or should that be worthless? It may be true, but it doesn’t change anything. Boston has awarded its 32 elected members a 28%   increase which pushes the basic allowance for a councillor with no special responsibilities – which in these cabinet dominated days is most of them - from £2,378 a year to £3,052. A further increase to £3,727 followed this spring, and next year there will be another rise to £4,400. This will amount to 85% since 2010, pushing basic “pay” from £46 to £85 a week.
﻿﻿
Publicity enthusiast Councillor Yvonne Gunter is apparently undeterred by the absence of a Borough Council bulletin for August – in which could normally be expected to include several photographs of her. In another ground breaking move – similar to the one which saw her included as a portfolio holder on a commemorative plaque alongside the mayor – we note that a report prepared on her behalf by an officer on allotment strategy includes a large colour portrait above her “foreward” (sic) to the document. ﻿﻿It has until now not been the norm for a bog standard report to be graced with a 4x4 inch photo of a portfolio holder. The only time we can recall such illustration previously is with the borough’s annual report, or specially produced documents, where top rankers’ photos have been used for illustration.

We had a case of the “Prince Harry in LA pictures shock” in miniature this week, after a reader sent us some photos that appeared on a Facebook page showing one of our local councillors in a less than glamorous light. The councillor in question – the borough’s youngest member, Tory Aaron Spencer, who represents Five Village ward – was pictured slouched in a chair variously puffing on a Churchill-sized cigar and upending a bottle of Glenfiddich  – one of the world’s most famous and expensive whiskies – to his lips. Our reader commented: “. .. these photos set a disgusting example, for both an elected representative and for other young people. Swilling whisky from the bottle is what we have come to expect from the yobs which blight our towns on a Friday night. I am not trying to be a killjoy, and young people should have fun. But the image there has more in common with the Bullingdon Club before a riot. For a councillor it’s a disgrace.” It’s a truism these days that people in the public eye – and that includes councillors – must be mindful of their behaviour at all times, so we broached the issue with Councillor Spencer. His initial response was to roll with the punch, and say: “The Facebook photos were taken by a 'friend' at a small private function. The picture shows a posed shot of me apparently drinking from the bottle. I have to admit that I don't have the constitution to gulp strong liquor straight from the bottle, but sipping it from a glass of course doesn't have quite the same 'photographic' appeal! Clearly, on the face of it this does not set a good example, but given that the photo is posed and it was taken in private it's perhaps not quite the same as the headline could suggest? I wonder if this is analogous to the recent Vegas Pool Party?  Of course I'm a local councillor, and he's third in line to the throne, but only one of us was photographed apparently drinking from a bottle at home.” We would have shown you the pictures  – which have since been removed from the page in question – so that you could judge for yourselves  but Councillor Spencer subsequently gave us a lecture on copyright law and the need for permission to reproduce them. As we weren’t too exercised about that, we said that we would instead describe them, at which point we received an e-mail including an extract from the Press Complaints Commission guidelines on privacy and concluding: “I think you agree that publishing this story is a violation of my privacy as it was at my home and is really none of the public's business. So I would suggest you don't publish anything about my private life, and I must say I will take it further if you do.” Incidentally one of the controversial “private” pictures of “cigar chomping” is the profile photo  on Councillor Spencer’s own Facebook page - on which he offers the basic information “19 years old. Thinks suits are awsome cuz lets face it people they are!  drinks whiskey and sherry.  gets by with a little help from his friends. :)” He also styles himself “Arron Cllr Spencer” – a bit like Alfred, Lord Tennyson! 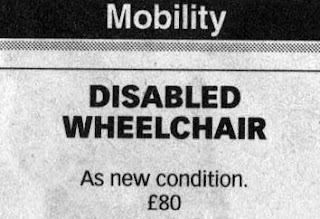 A disabled wheelchair? Could a puncture repair kit provide the answer?